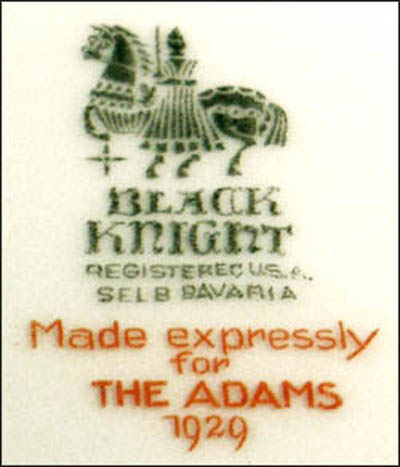 By 1986, the hotel's room count had been reduced to 178. It had a restaurant and a coffee shop, but no information has turned up about their size or what they looked like.

In 1991, while the hotel was being gutted and converted into 54 condos, an appeal was made to the Manhattan Borough President's Office for an address change to 1049 Fifth Avenue, where the side facade is located. Usually such a change is not allowed, but in this case it was. A Fifth Avenue address overlooking Central Park is a huge selling feature for condos, and in 2015, the condos were selling for around $1 million.

The celery dish was manufactured on Hutschenreuther's Black Knight trade name china and has a decal border in pale blue and tan outlined in black. Oval frames contain the illustration of a standing woman with acanthus scrolls flanking the ovals. A connecting border of small ovals alternates with tan X shapes. There is the profile of a woman's head in every other oval. A rim band of tan triangles and dots completes the design.