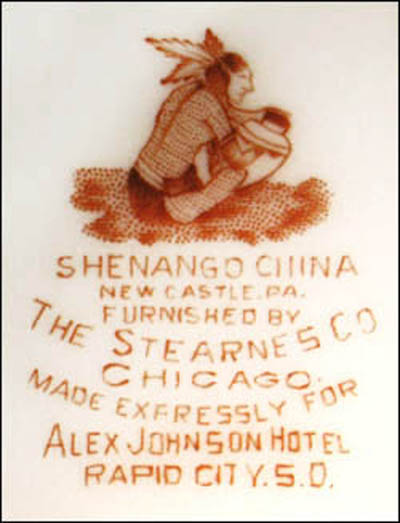 Notes: Hotel website. The 190-room hotel at 523 6th Street in Rapid City, S.D., opened in 1928. It was named for railroad executive Alex Johnson, who may have had a financial interest in the hotel's construction. The exterior design was described as Germanic Tudor.

By 1937, the hotel bedrooms were decorated in Native America motifs. The stylized arrowhead pointing downward, with Native American head in profile logo, is shown on pre-1962 matchbooks.

In 1947, it became part of the Eppley Hotels chain.

On May 22, 1956 it became a Sheraton Hotel and was renamed Sheraton-Johnson. By 1969 "Sheraton" was dropped and the name was back to Alex Johnson. Now (2016), it goes by Hotel Alex Johnson and is listed on the National Register of Historic Places. Also, according to its website, the hotel "has long been known as one of the most haunted hotels in South Dakota." Regular other-worldly visitors include a lady in white, a child, and Alex Johnson himself.

This transfer pattern in brick red contains a border that somewhat resembles teepees.