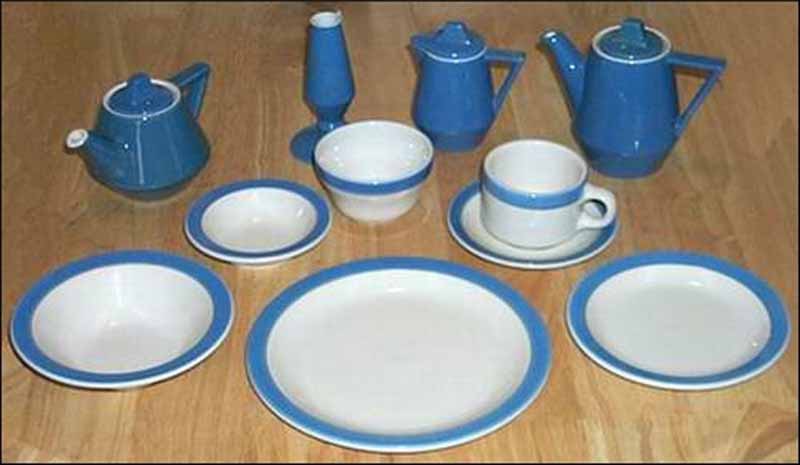 Notes: This Amtrak service china was used from 1973 until 1981 (dates approximate). Called National, this was a slightly modified design from the first Amtrak service that was made by Walker China.

Serving items in blue were made by Hall China from its Cadet line, but done with a shade of blue that was specified for Amtrak. Backstamps are often hard to read (with the exception of the bud vase) and have either the round or rectangular Hall stamp. Hall was changing its backstamp at the time of the contract.

Items made by Hall for Amtrak included a bud vase, a teapot, a coffeepot, a creamer with lid and a squared open sugar and pitcher (hallboy shape). The service china is not Amtrak backstamped.

Plates, cups and bowls were also made by Mayer China in 1973 and 1974, and from 1975 to 1980 by Homer Laughlin China. These were white-bodied with a blue band on the edge and a thin gray line between the inner edge of the band and the well.

Mayer also made a tapered coffee cup, while Homer Laughlin had a low straightsided cup design. Other pieces made by these companies for Amtrak included a dinner plate, a side plate, a saucer for the cup, a cereal bowl, a fruit bowl and a custard cup.