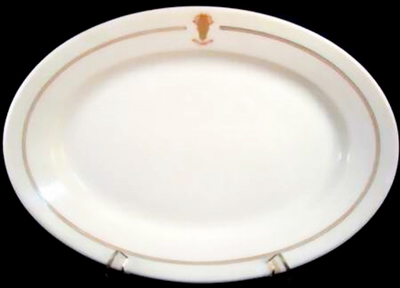 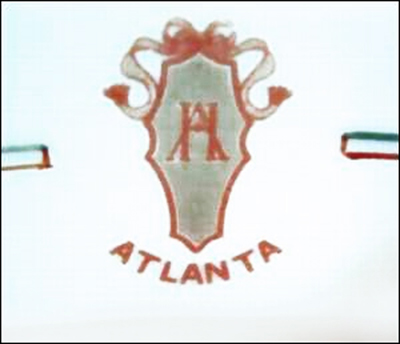 Notes: The Hotel Ansley was built in 1913 by Edwin P. Ansley of Ansley Park fame. The building was located on the 100 block of Forsyth Street in Atlanta, Ga.

In 1953, the Ansley was sold to the Dinkler Hotel chain, the second downtown Atlanta hotel purchase for Dinkler Hotels and where the Dinkler corporate office was located. It was renamed the Dinkler Plaza Hotel in 1953 (40 years after its construction).

The building was demolished in 1973.

White body with mid-rim green and red pinstripes or lines. Topmarked shield with multiple convex sides, containing an interlocking "H" "A" monogram in red against a gray-green background, with a bow and ribbon on top of the shield and "Atlanta" curved below in red. Keywords: rwcnHA rwcnAH