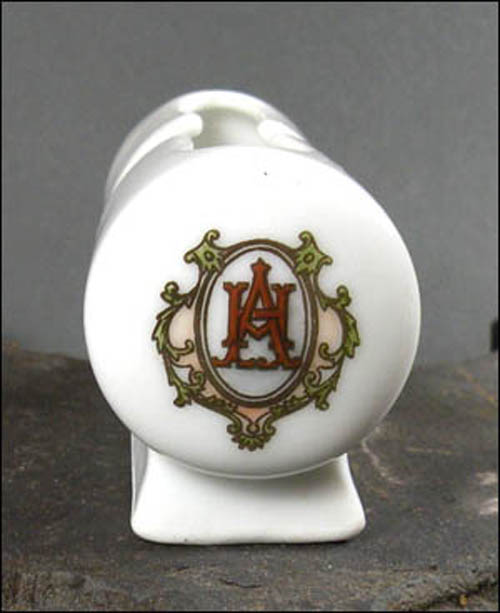 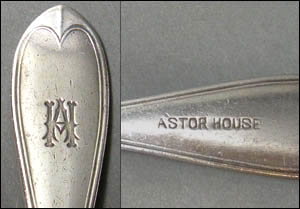 Notes: According to the Wikipedia, the Astor House was the first luxury hotel in New York City. Located on the corner of Broadway and Vesey Street in Lower Manhattan, it opened in 1836 and soon became the best known hotel in America."

Astor House was built by John Jacob Astor and contained 309 rooms. "For decades, the Astor House was the best known and most prestigious hotel in the country." But by 1926, hotel was considered old-fashioned, and the entire building was demolished. (Prior to that, in 1913, the south section was razed for subway construction.)

The Astor House crest was placed on each end of this white toothpick holder. The design has the initial AH interlocking in dark red and outlined in black within an oval. The oval has a narrow black line and a thicker olive green line and from there olive green lines form a decorative swirl around the oval. The space between the decorative lines and the oval is filled with pale pink. Keywords: rwcnAH rwcnHA

It is interesting that the ID for this toothpick holder came from a very old pack of toothpicks, shown above.