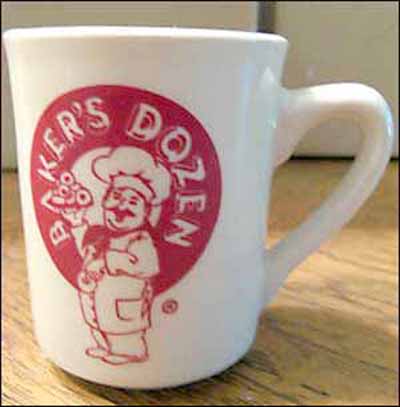 Notes: Founded in 1977 by Peter and Ted Paraskakis, the Baker's Dozen Donut Company is a chain of Canadian pastry shops based in Mississauga, Ontario. By 1993, there were more than 100 chain-owned and franchised Baker's Dozen shops mostly located in the Province of Ontario. The store had several slogans, including "Not Just Donuts…" and "You Always Get More In A Baker's Dozen!" By 2020, the company reportedly had 35 shops located across the country.

This mug, similar to the Baker's Dozen shop signs, features a European pastry chef caricature with a mustache, holding a tray of a dozen donuts in one hand and the thirteenth or "Baker's Dozen" donut in the other hand.