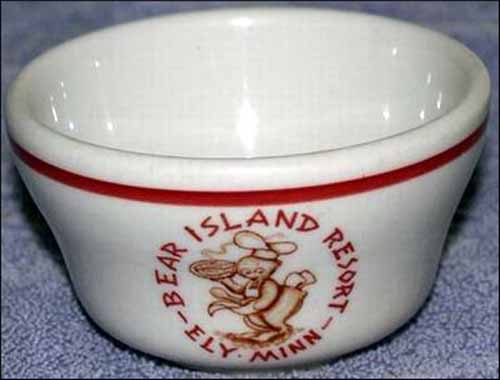 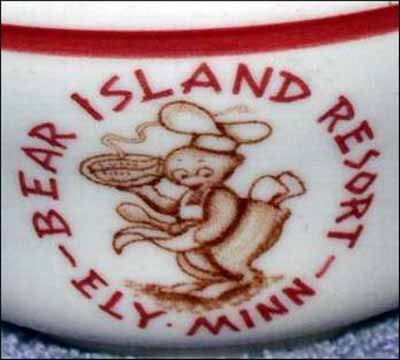 Notes: Located in Ely, Minnesota, just five miles outside of Babbitt, the Bear Island Resort was first owned and operated by Elizabeth Ahlquist Day from 1947 to 1972. The resort offered cottages, cabins and casual dining at its Viking Manor restaurant.

Beginning in May 1973, the resort & restaurant continued under new ownership and advertised in The Ely Echo (MN) newspaper through November 1976. The latest local newspaper reference to the Viking Manor Supper Club (a slight variation in the restaurant name) at Bear Island Resort was in the social pages of the Askov American (MN) on August 3, 1989.

White body with red band around the bouillon cup rim. Topmarked by a brown bear dressed in an apron, wearing a chef's hat, carrying a platter of sizzling fish in one paw and a large spoon in the other paw. The words "BEAR ISLAND RESORT – ELY, MINN." encircle the bear in red lettering.