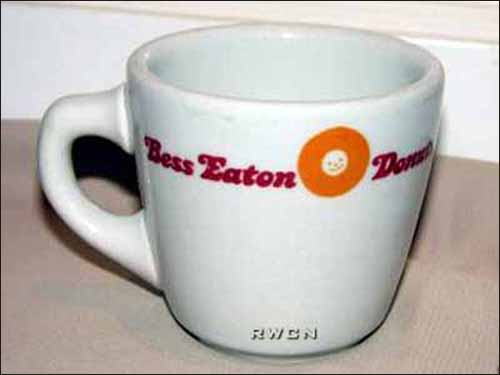 Notes: Based in Westerly, RI and founded in 1953 by Angelo (Bangy) Gencarelli Jr., the Bess Eaton Donut Flour Company was a small chain of 48 coffee shops in southern New England. The company closed in 2004 due to financial problems, and according to Wikipedia, "other issues like printing biblical quotes on their cups."

Following bankruptcy litigation, the firm sold its retail division for a reported $35 million to the fast-food chain Wendy's International Corporation. Within two months of acquisition, Wendy's had converted 42 of the Bess Eaton shops to their Tim Hortons brand. In conjunction with the sale, Bess Eaton closed its production facility and corporate headquarters. Wendy's later sold Tim Hortons in 2006, but kept ownership of the Bess Eaton trademark.

From 2008 to 2010, Tim Hortons closed the doors on all shops in Southern New England, including all of the Bess Eaton shops it had acquired.

In late January 2011, David Liguori registered the Bess Eaton trademark under his company, Bess Eaton Management LLC, according to the U.S. Patent and Trademark Office, and acquired the leases of several of the closed Tim Hortons. In 2012, there were Bess Eaton Coffee Shops in Westerly, Wakefield, and Galilee, Rhode Island, and Pawcatuck, Connecticut.