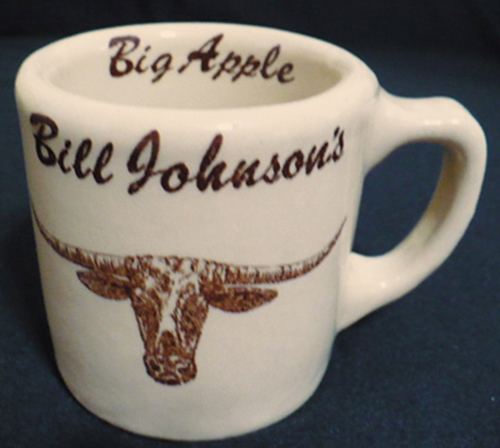 Notes: Founded by cowboy Bill Johnson with his wife, Gene in 1956, the original Big Apple restaurant was located at 3757 East Van Buren Street in Phoenix, Arizona. Bill Johnson was more than just a restaurant entrepreneur, he was a popular radio personality, as well as an actor, pilot, stuntman, hypnotist and inventor. He performed nightly broadcasts for his restaurant patrons and featured famous guests such as Wayne Newton, Johnny Cash and Waylon Jennings on his radio show. Considered a "True Arizona Original," Bill Johnson passed away in 1966.

Apparently, the Big Apple did not refer to New York City, but to the late Bill Johnson's favorite dance craze at that time.

By 2009, there were six Bill Johnson's Big Apple restaurants located throughout Arizona. For four family generations, the restaurant chain continued operations under the Johnson family management, until the family filed for bankruptcy in November 2014.

In May 2015, arrangements were made for the original restaurant to be sold to Gateway Community College and Bill Johnson's Big Apple closed its doors permanently. The college reportedly paid $945,000 for the restaurant and later razed it for a college parking lot.

For interior and exterior photos of the original Bill Johnson's Big Apple:
https://thewackytacky.blogspot.com/2013/04/chow-time-bill-johnsons-big-apple.html

Tan body, topmarked with a large brown steer head with "Bill Johnson's" on the outer rim and "Big Apple" on the inner rim in brown script lettering.