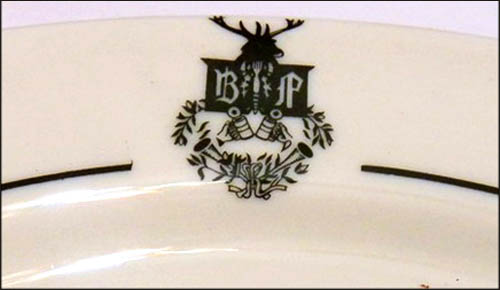 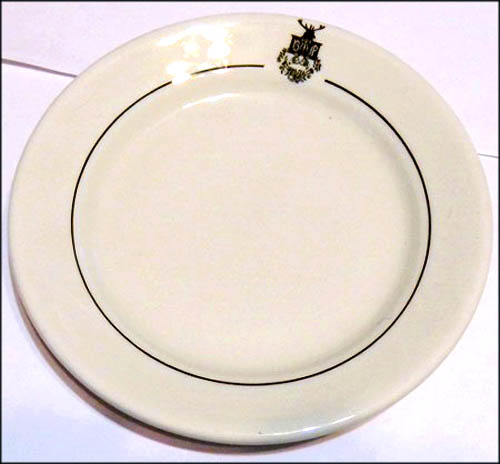 Notes: The Black Forest Restaurant may have been owned by Larry Schwamb beforehand, but it was purchased by Helen Reinsissel in 1958, and she ran it until selling it in 1974. Her restaurant was located at 2636 N. Clark Street in Chicago, and the phone number was Diversey 8-7930. It had an interior reminiscent of a hunting lodge with stag heads mounted on the walls and offered a developed European fare, salad bar, and had a long bar as well, to offer refreshments to patrons.

The plate is cast in white and has a black pinstripe encircling it at the verge. At the top, the pinstripe is interrupted with the restaurant logo in black. The logo is of a pair of biersteins saluting in front of a wooden sign with the initials B and F in Olde English font. Further details include a stag head atop the logo, a lobster and fork centered and a wreath with cornets underneath. Cereal bowls and smaller side bowls have also been noted with the same decoration.

Due to the nature of the Black Forest's logo's size, combined with the distinctive font appearance, this B F shield logo has often been misidentified as a B P.