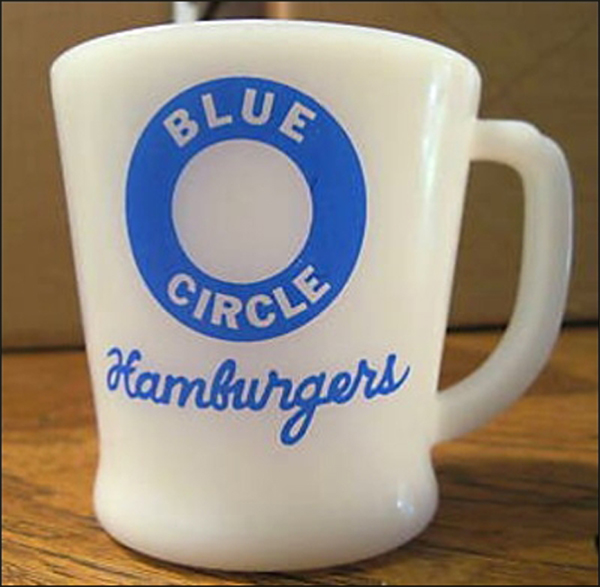 Notes: The Blue Circle hamburger chain was founded by Homer Longmire in 1931 in Knoxville, Tennessee. The chain eventually grew to over 30 locations. The motto of the chain was "A happy place for hungry people," and the house specialty was a grilled burger, diced onions and mustard on a steamed bun. Breakfast was also served along with french fries, chili, onion rings, pork barbecue, as well as baked goods from the Blue Circle bakery.

Most locations had both walk-in service and drive-in with telephone order service available. The chain also had a company laundry for employee uniforms and eventually operated B/C Supply, a subsidiary company for the storage and distribution of nonperishable items.

Once Blue Circle was established, franchises were sold in middle Tennessee and as far away as Alabama and Virginia.

The Longmire family sold the chain in 1966 to Wometco of Miami, FL and a new image emerged. Soon after, new restaurants were opened in South Carolina, but the chain's reputation faltered, buildings fell into disrepair, competition grew and Wometco sold out to the Enroc Company of Milwaukee, WI in 1974. By 1975, with only 17 restaurants remaining, the company filed for bankruptcy. An auction was held in September of that year and everything was liquidated.

As of 2020, only one Blue Circle remains in Bristol, Tennessee at 333 Bluff City Highway. The restaurant opened in 1964 and still has the original sign out front.