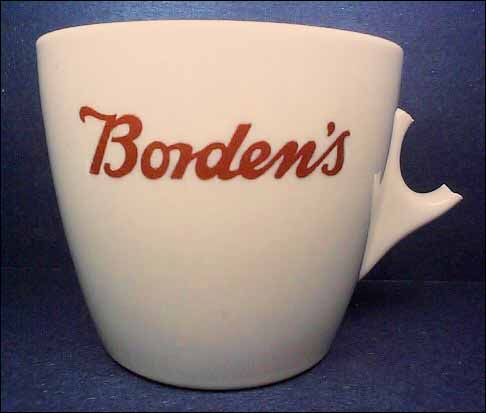 Notes: The company was founded by Gail Borden, Jr. who, in the 1850s, found a way to condense milk because at that time no one knew how to keep milk fresh. After struggling for several years, Borden partnered with Jeremiah Milbank, who financed the company – then known as New York Condensed Milk Company. During the Civil War, the U.S. Government ordered milk for the troops.

After the death of Borden in 1874, his sons John Gail and Henry Lee diversified and started delivery of fresh milk in both New York and New Jersey. By 1899 Borden Condensed Milk Company was incorporated and in 1919, renamed Borden Company. It became the nation's largest distributor of milk and also offered ice cream and other dairy products.

Tan body, dark brown Borden's on the side of the cup. Possibly used in restaurants to advertise Borden's dairy products or in a company cafeteria or executive dining room.