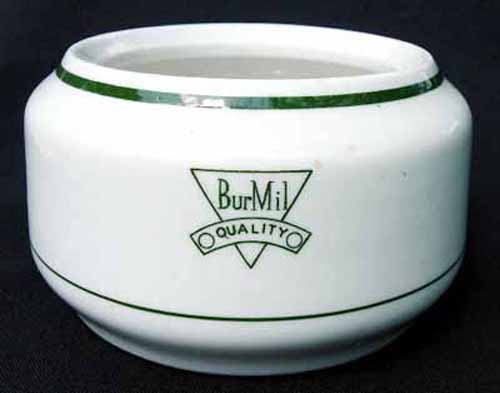 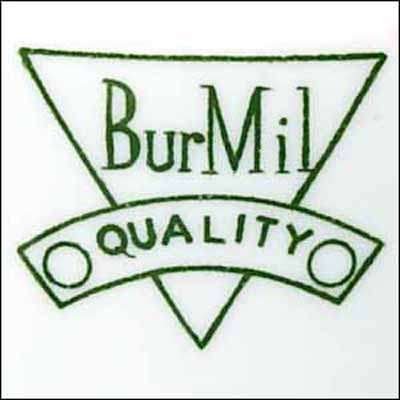 Notes: The BurMil Club was Burlington Mills' 250-acre recreational facility, located in Greensboro, N.C., home of its corporate headquarters at the time of the sugar bowls production. The company's name changed to Burlington Industries in 1955.

It was the practice of BI to underwrite country clubs at some of its locations (those with division headquarters, for example) for its management-level employees and their families, with club houses, tennis courts, golf courses, pools and minimal fees. This was a perk to make up for assigning white-collar employees to work in small, frequently poor, frequently dry (i.e. where public sale of alcohol was prohibited) Southern mill towns with few local recreational amenities.

The BurMil Club was on an elevated level from most of these clubs, however, since it was part of BI's flagship campus in Greensboro. And in the absence of liquor-by-the-drink at the time, it would have been the best place to graciously entertain visiting corporate executives.

Downsized by its falling fortunes, BI sold the recreation facility to Guilford County in 1989. It is now the public Bur-Mil Club and Park. Burlington Industries itself filed for bankruptcy protection in 2001 and is now (2020) operating as Burlington WorldWide Apparel and Burlington House Interior Fabrics by International Textile Group.

Plain white china with green lines and central crest featuring BurMil within triangle and the word Quality within a banner.