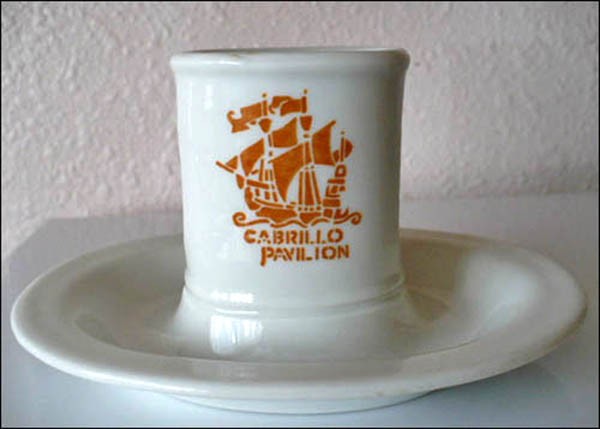 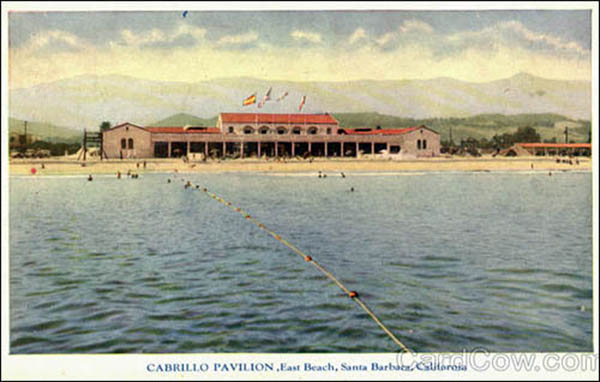 Notes: An early postcard from the University of California, Santa Barbara Library provides a colorful description of Santa Barbara's Cabrillo Pavilion: "Property of the people of Santa Barbara – This pavilion on the East Beach frontage of the city of Santa Barbara is considered to be the finest example of a municipal pleasure building in California, both from the standpoint of architecture and utility. The building of this pavilion is the first step in a campaign to save the beach lands of Santa Barbara from tawdry exploitation. Accommodations are available for 2500 bathers. Restaurants, coffee shops and soda fountains are conveniently located to the beach and to the dance floor on the upper story. Ample parking space is also available."

As described in the Montecito Journal, in an effort to keep the area from the afore-mentioned "tawdry exploitation," in 1924 resident Frederick Forrest Peabody "formed the East Boulevard Improvement Association, which purchased ocean front land and held it until the city could purchase it for parkland. Up to this point, East (Cabrillo) Boulevard was devoid of the usual shops, rooming houses and amusement concessions that lined other Southern California Beaches, and they wanted to keep it that way.

"In 1925 David Gray announced that he would build a public pavilion and bathhouse if the city would agree to furnish and staff it. Roland Sauter designed the two-story pavilion in the Spanish Revival style, but when it came time to furnish it, the city had no money. Already in for $110,000, Gray opened his wallet again and supplied $65,000 in furnishings. "

Among the amenities were kitchens in which the staff made its own ice cream, two air-conditioned soda fountains, a lunch stand and a self-service tearoom counter.

The match stand has the words Cabrillo Pavilion underneath what looks like a sailing ship that could have come from the Spanish armada. All decoration is in rust orange.