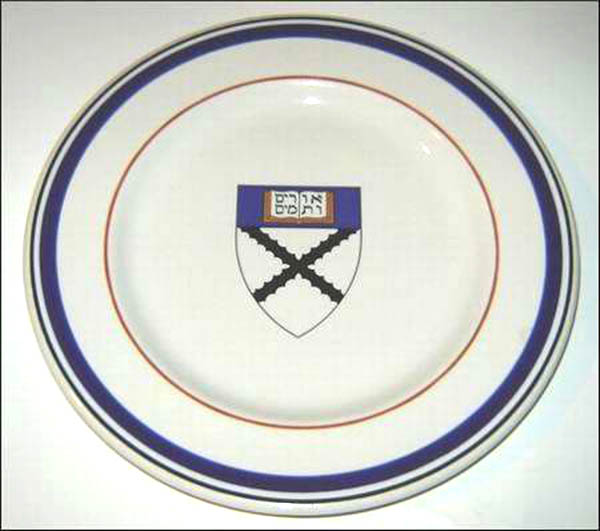 Notes: Located at 189 Elm Street in New Haven, CT, Calhoun College – now (as of 2020) Grace Hopper College – is one of Yale's 12 Residential Colleges. In 1932, with the institution of the college system, the residential building at the corner of College and Elm Streets became Calhoun College, named for John C. Calhoun (B.A. 1804), alumnus, statesman, and orator. Like many of the other residential colleges at Yale, Calhoun College was named in honor of one of Eli's illustrious sons.

The Calhoun College name was controversial because the United States Senator from South Carolina, John C. Calhoun, was a staunch defender of states' rights and the preservation of slavery. There were repeated and now successful attempts to convince the university to rename the college to reflect changing sensibilities about honoring advocates of slavery.

White body with a black pinline and dark blue band outer border and gold inner border. Topmarked with the Calhoun College coat of arms, which combines the university arms, set atop the Cross of St. Andrew.