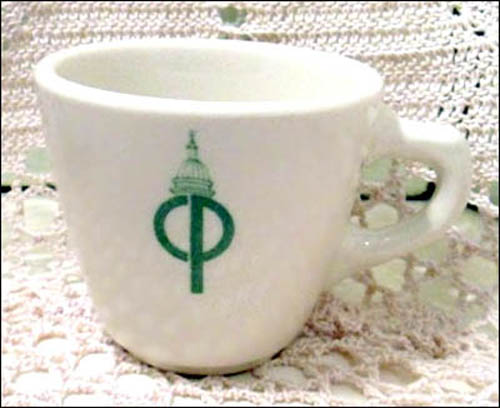 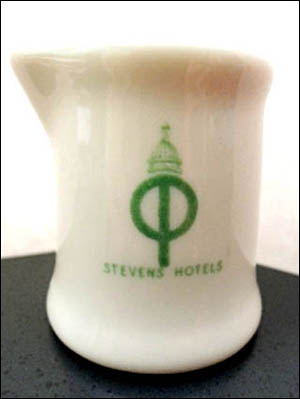 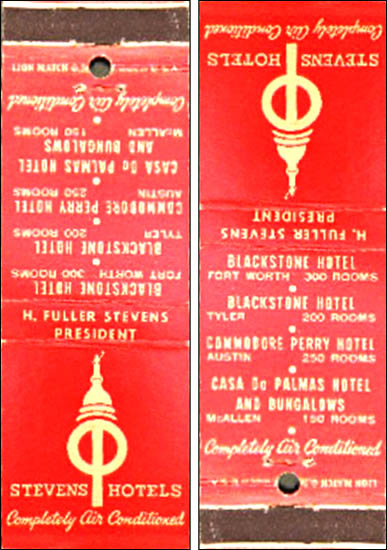 Notes: The matchcover shown below lists various hotels that were part of the Stevens Hotels chain, all in Texas and owned by H. Fuller Stevens of Dallas. According to his obituary in the Lubbock Evening Journal, Stevens died at age 50 on Sept. 27, 1953. The obit says he "founded his company in 1944 and acquired a lease on the Blackstone Hotel in Tyler. He bought the Casa de Palmas Hotel in McAllen in 1945, the Blackstone in Fort Worth in 1946, and in 1950, opened the new Commodore Perry in Austin He sold the Fort Worth Blackstone lease in 1952 and the Tyler lease last June [1953].

This chain should not be confused with The Stevens Hotel in Chicago, which was owned by James W. Stevens.

The logo is executed in a medium bright green and has three elements. The center graphic is heavy circle that is intersected vertically by a line, forming a stylized C and P – or CP, for Commodore Perry. Above the graphic is a line drawing of a capitol dome, which refers to the hotel's location in the Texas capital of Austin. Below the graphic are the words in all caps, STEVENS HOTELS. Keyword: rwcnCP