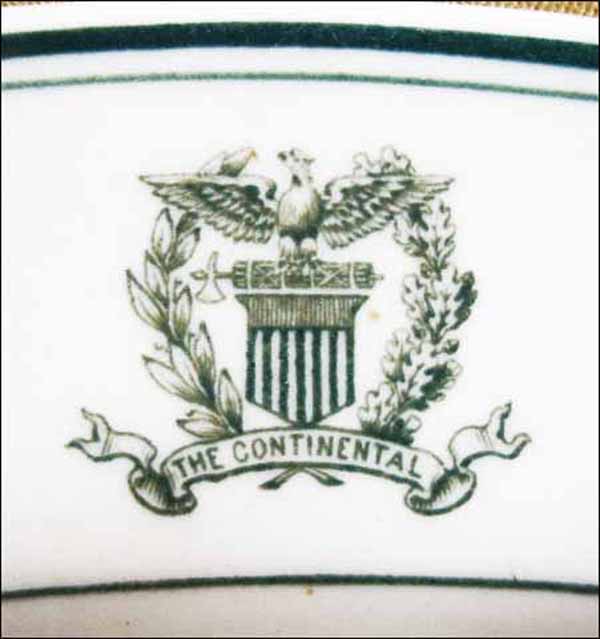 Notes: The Continental Hotel was one of the first luxury hotels to be erected in Philadelphia, PA. Designed by architect John McArthur, Jr. and constructed by mason William Struthers, it was situated at the intersections of Ninth and Chestnut streets in the Center City district.

Opened on February 20, 1860, the Continental advertised a room and four meals for the lavish sum of $2.50 a day. Each of the spacious rooms was fitted with a fireplace, but a fire would cost guests an additional 75 cents.

In the Continental's heyday, the rich and famous of the time mingled by candlelight in the elegantly appointed lobby, enjoyed fine dining in its many banquet halls, and debated the weighty subjects of the day over drinks in its bar. Over the years, the Continental's guests included a parade of luminaries, such as the Prince of Wales, King Edward VII, Brazil's Dom Pedro, novelist Charles Dickens and numerous US Presidents.

The Continental Hotel was closed on September 2, 1922 and dismantled to make room for the Benjamin Franklin Hotel, which still stands today as the Ben Franklin House, offering apartment and office space, as well as a taste of Old Philly to modern residents.

White body with green stripe rim treatment. Topmarked with a crest of a green circular wreath, containing a shield with stripes, a spread winged eagle sitting atop a fasces bundle (a bundle of sticks tied together into a cylinder including an axe projecting from the bundle symbolizing power and jurisdiction and/or "strength through unity"), a curved ribbon banner below with "The Continental" written on it.

ID and photo submitted by floralady