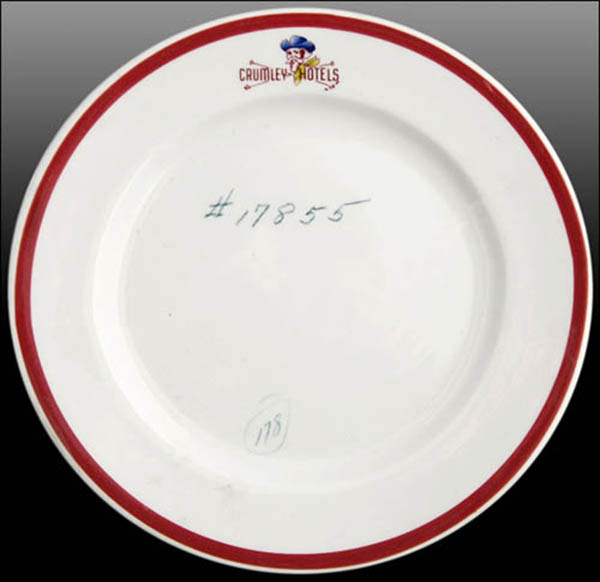 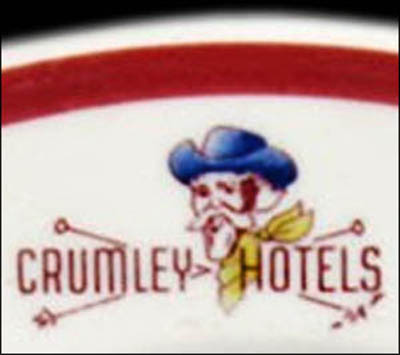 Notes: Newton (Newt) Hunt Crumley (1911-1962) operated several hotels in Elko and Reno, Nevada, including the Commercial Hotel and Casino and the Ranchinn Motor Hotel in Elko, and the Goldfield and Holiday Hotel in Reno. His ownership went back as far as 1923. The 1949 and 1950 Hotel Red Books listed the ownership as Crumley Hotels. (According to his obituary in the San Francisco Chronicle, Crumley was a close friend of Bing Crosby. In 1955, he sold his two Elko hotels for $2 million.)

According to a remembrance of Crumley posted on the Elko County Rose Garden website, on April 26, 1941, Crumley changed the way casinos operated by introducing the concept of providing big name entertainers in his casino at the Commercial Hotel in Elko. Circa 1945 casino roulette chips were marked with a similar prospector logo as this plate.

The Syracuse sample plate, #17855, is crested with a decal illustration of the head of a white-bearded man wearing a prospector's hat. Crumley Hotels, in red, is below the illustration. Crossed arrows or possibly branding irons are projecting from lettering. Brick red rim band.