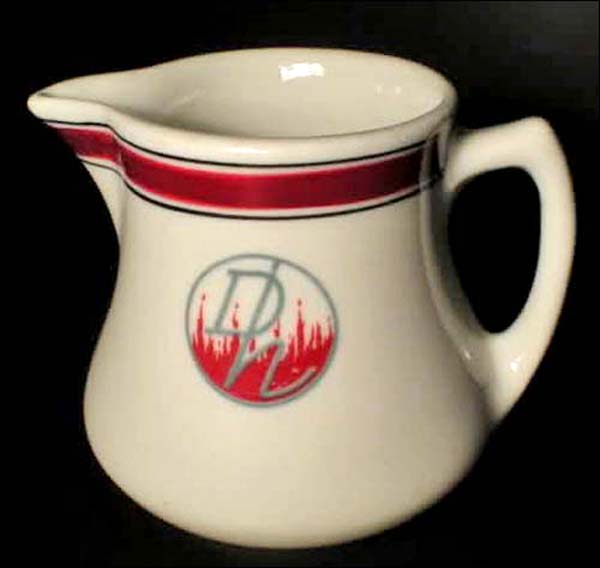 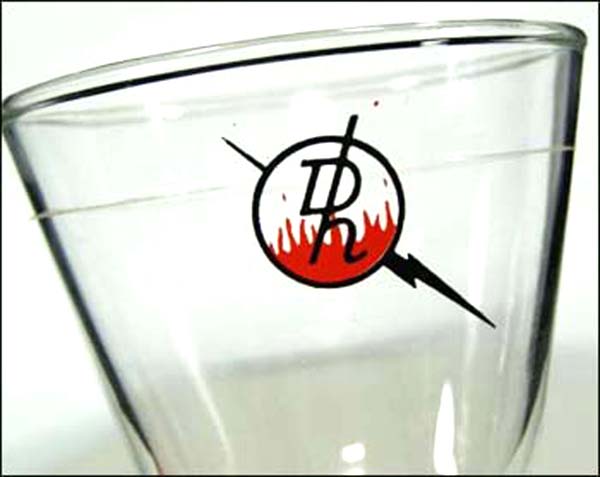 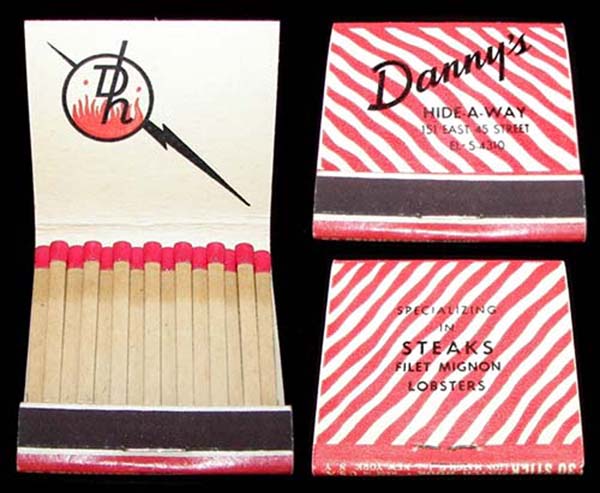 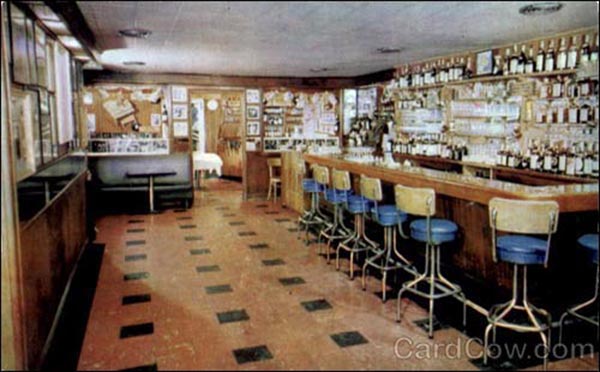 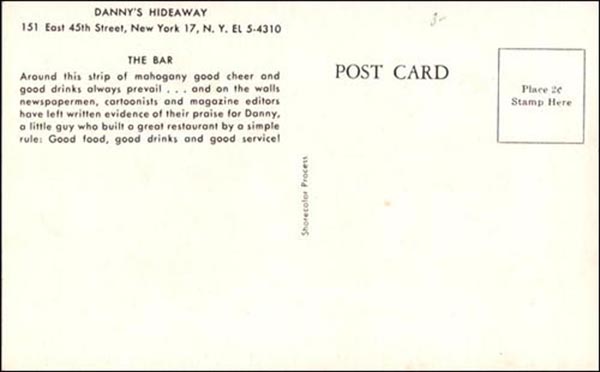 Notes: Almost every search on the Internet that yielded information about this bar and restaurant referred to it as Danny's Hideaway. For that reason, it is being spelled that way in this entry despite the matchbook that was key to the pattern's identification that spells it Danny's Hide-A-Way – and also a sugar packet found on flickr.com.

Located at 151 East 45th Street in New York City, Danny's Hideaway was a beloved restaurant and bar that specialized in steaks, filet mignon and lobsters and was frequented nightly by famous names in entertainment and sports. It was so iconic a watering hole, in fact, that Don Draper entered Danny's bar in the 2012 Mad Men Season 5 finale (seen at 1:28 in the clip on this page) and ordered an Old Fashioned.

An Oct. 29, 1945 story in Time Magazine noted that the restaurant was opened in 1945 by Dante Stradella, "a black-haired little ex-soldier. … He had served 18 months overseas with the Army, had been wounded at Messina, was trying to make a start on borrowed money."

Stradella's mother, Mama Rose, did the cooking. It became the largest of the steak houses on "Steak Row" and eventually had 11 dining rooms, seating 300 customers.

From The Lost New York City blog, the restaurant is described this way: "Outside, a 60-ft. awning proclaims it the home of DANNY'S HIDEAWAY and His Inferno, His Music Room, His Menu Room, His Key Room, His Nook. Celebrity parties have become his specialty and everything has been celebrated there from the signing of a new TV contract to the taking of a bride.

"One of the youngest restaurateurs on Steak Row, and certainly the smallest – he weighs 130 pounds, stands 5 ft. 2 inches on tiptoe – Dante Charles Stradella, as he was christened (Stradella means 'little street'), is also probably the most photographed. The walls of his restaurant are adorned with some 2,000 photographs of celebrities of stage, screen, TV, radio, sports, advertising, magazines and newspapers, and in at least 90 per cent of these pictures Danny appears as a host."

Danny's Hideaway closed in the mid-1970s, allegedly because of nonpayment of back taxes, but a bailout from friend Frank Sinatra enabled Stradella to open in a new location. It is not known when Danny's ultimately went out of business.

The creamer has a wide dark red band at the rim with black lines on either side. The logo is a circle, outlined in gray, with capital D intersected by a lowercase h, also in gray. Behind the initials are rising flames in red, ostensibly symbolizing Danny's/Dante's Inferno.