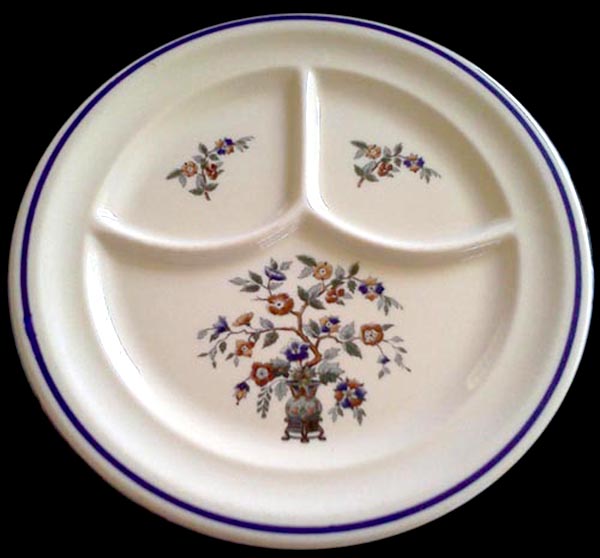 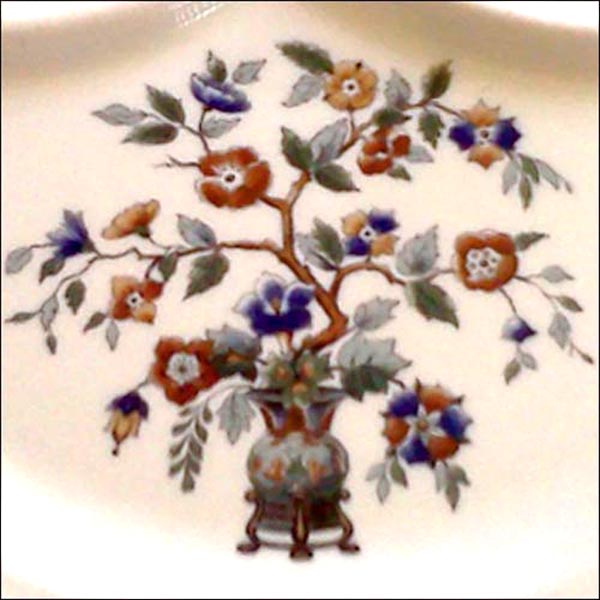 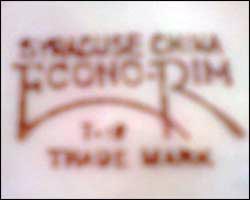 Notes: The tan-bodied grill plate has a deep blue stripe around the rim. The center motif appears to be a Chinese vase sitting on a wooden Chinese base with a blooming tree emerging from the vase with flowers in shades of blues and red orange.

The plate is interesting because it bears the Econo-Rim backstamp but does not have the Art Deco relief design commonly associated with Econo-Rim.

According to the book "Syracuse China," Econo-Rim was designed in 1933 by R. Guy Cowan. Its narrow rim allowed the well of a plate to hold more food within the same diameter. "Cowan conceived it in part for use in public eating places where space was at a premium … This was important in railroad and steamship dining rooms and for hospital trays."

However, according to the book, "Some hotels and restaurants found that Econo-Rim's Art Deco relief designs did not always emerge cleanly from dishwashing machines." Hotel magnate Ellsworth Statler suggested that if the shape were made with plain rims, he would use it in his coffee shops.

An order was placed in 1935 for the "plain Econo-Rim," with the exception that the Econo-Rim backstamp would not carry the "patent-pending" language. "This alteration of the shape was then called Statler," though orders of this style were by no means limited to the Statler hotel chain.

The so-called "variant shape" was renamed in 1939 by Edward Otis of Syracuse's design department, who called it Morwell ("Because there's more well and less rim.")

With its 1939 Econo-Rim backstamp without the "patent pending," it is likely that this plate's rim should be referred to as Statler and that it was manufactured before the overall shape was named Morwell.

ID and photos contributed by Jeff-Pyrex