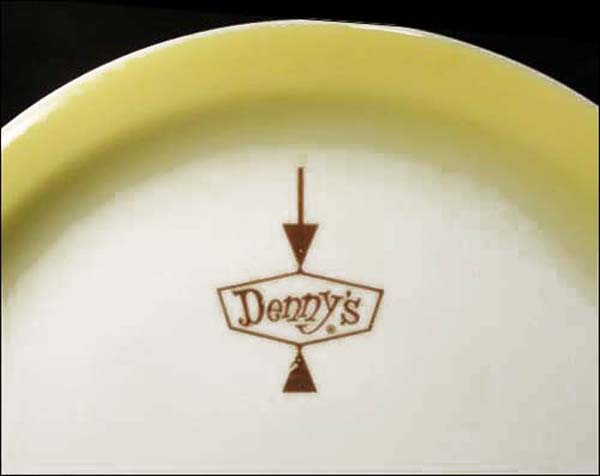 Notes: Website. Richard Jezak and Harold Butler founded Denny's (as Danny's Donuts) in Lakewood, Calif., in 1953. Denny's expanded to 20 restaurants by 1959, when the chain was renamed Denny's to avoid confusion with another chain, Doughnut Dan's.

Denny's is well known for being open 24 hours a day and serving breakfast, lunch, dinner and dessert around the clock. The "Grand Slam Breakfast was introduced in Atlanta as a node to Hank Aaron," according to the chain's website.

Denny's began selling franchises in 1963, and most Denny's restaurants are now franchisee-owned. The business has continued to grow and by 1981 there were more than 1,000 restaurants in all 50 of the United States. And as of 2010, Denny's had 1,600 restaurants.

The plate has the older Denny's logo on a white plate with a yellow airbrushed border. The logo is completely in brown, with the name Denny's inside a hexagon. An arrow points down to the Denny's sign.

ID and photo contributed by Marc