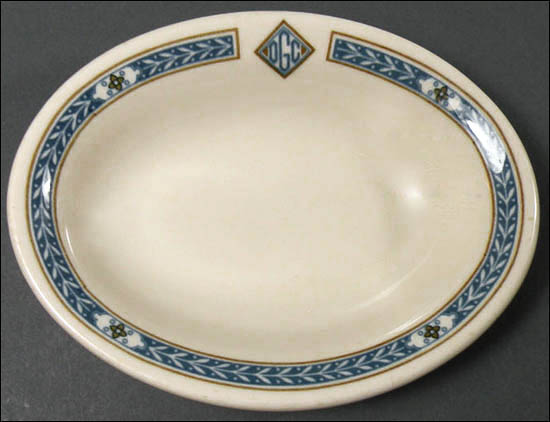 Notes: From the club's website, the Detroit Golf Club was founded by William R. Farrand and several friends in 1899, with construction of the first club following in 1900. The club now stands on 219 acres in Detroit, Mich., with clubhouse and two 18-hole golf courses.

The ID for this bowl is based on the same monogram and associated Detroit Golf Club backstamp found on a silver coffee pot owned by RWCN member uniondepothotel.

The bowl has a border of repeated leaves in white against dark blue, interrupted by a small flower motif in rust brown. The border is surrounded by an offset rust brown line. The crest in the same colors is DGC, with the G being the largest letter. The oval bowl has the Lamberton Sterling Made in U.S.A. rubber stamp on the back, with an H-2 for 1970.