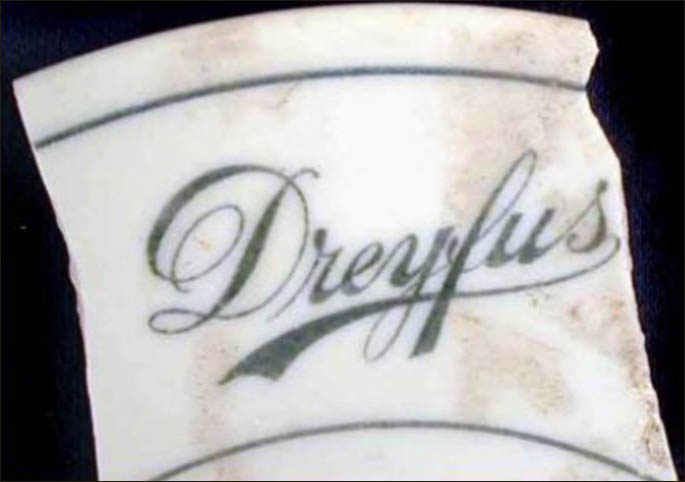 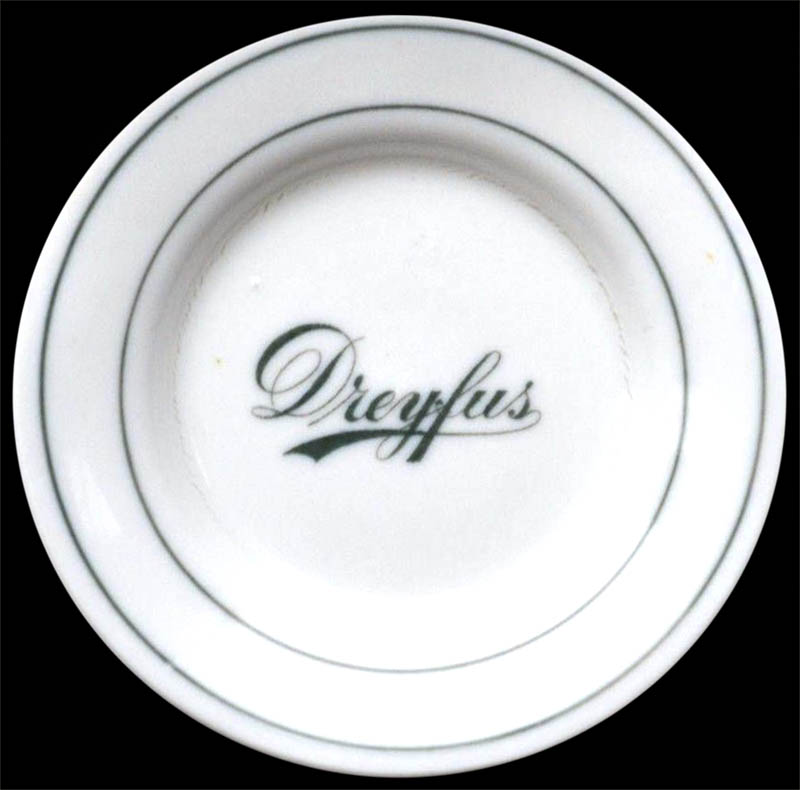 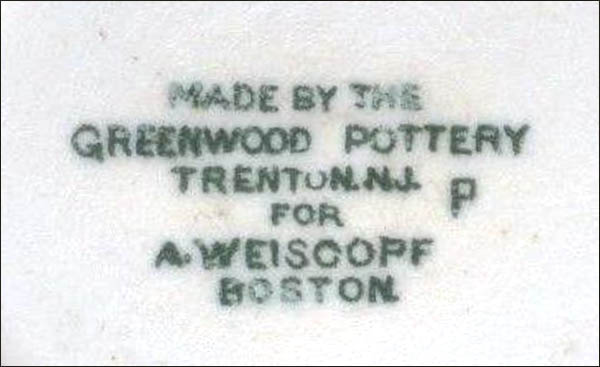 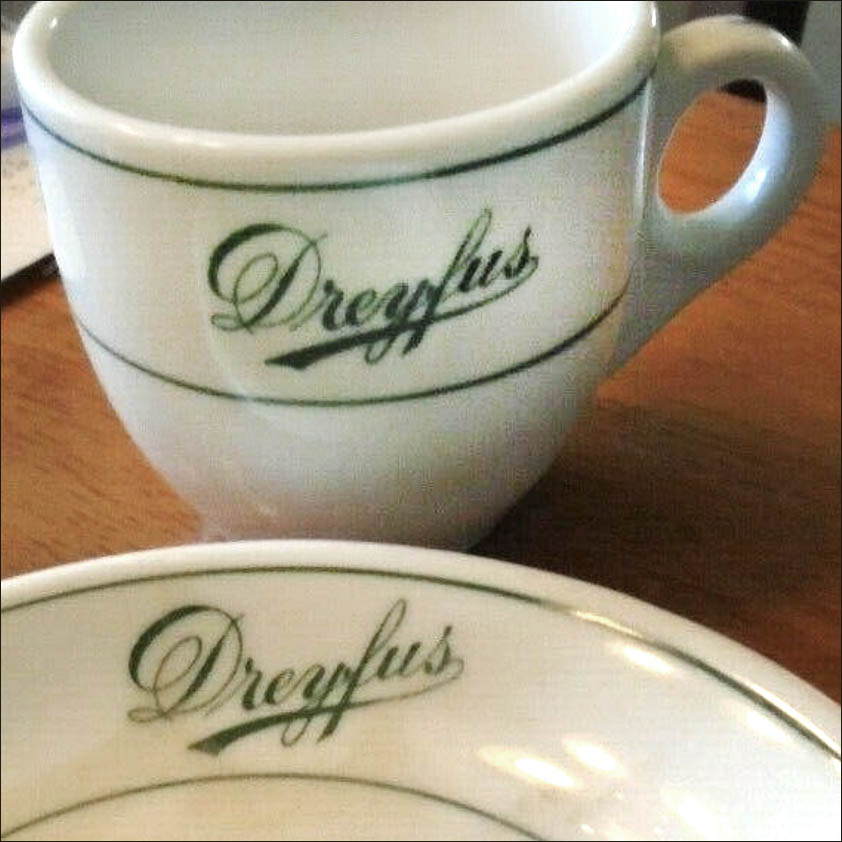 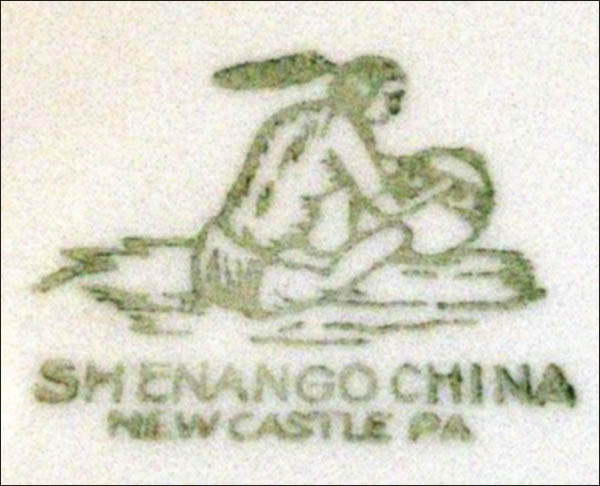 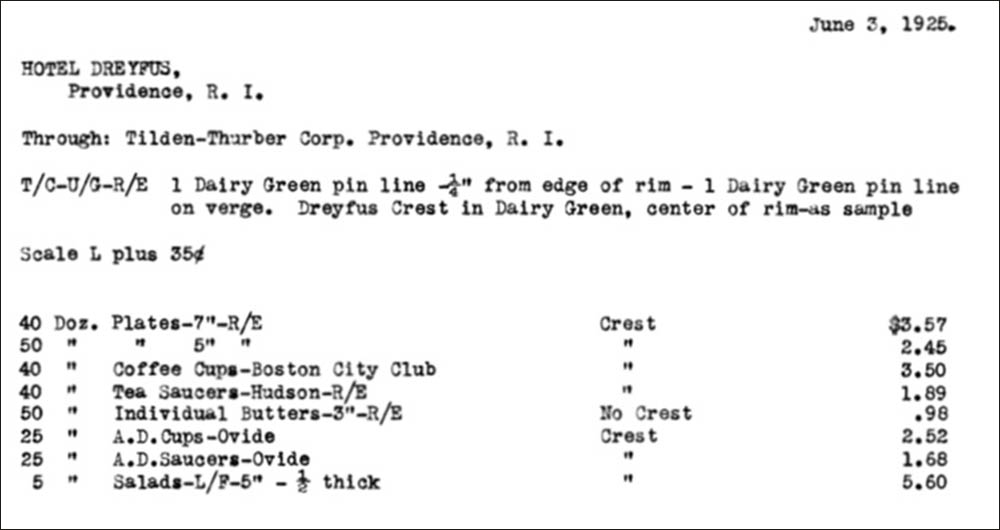 1925 order for the Scammell China used at the Hotel Dreyfus 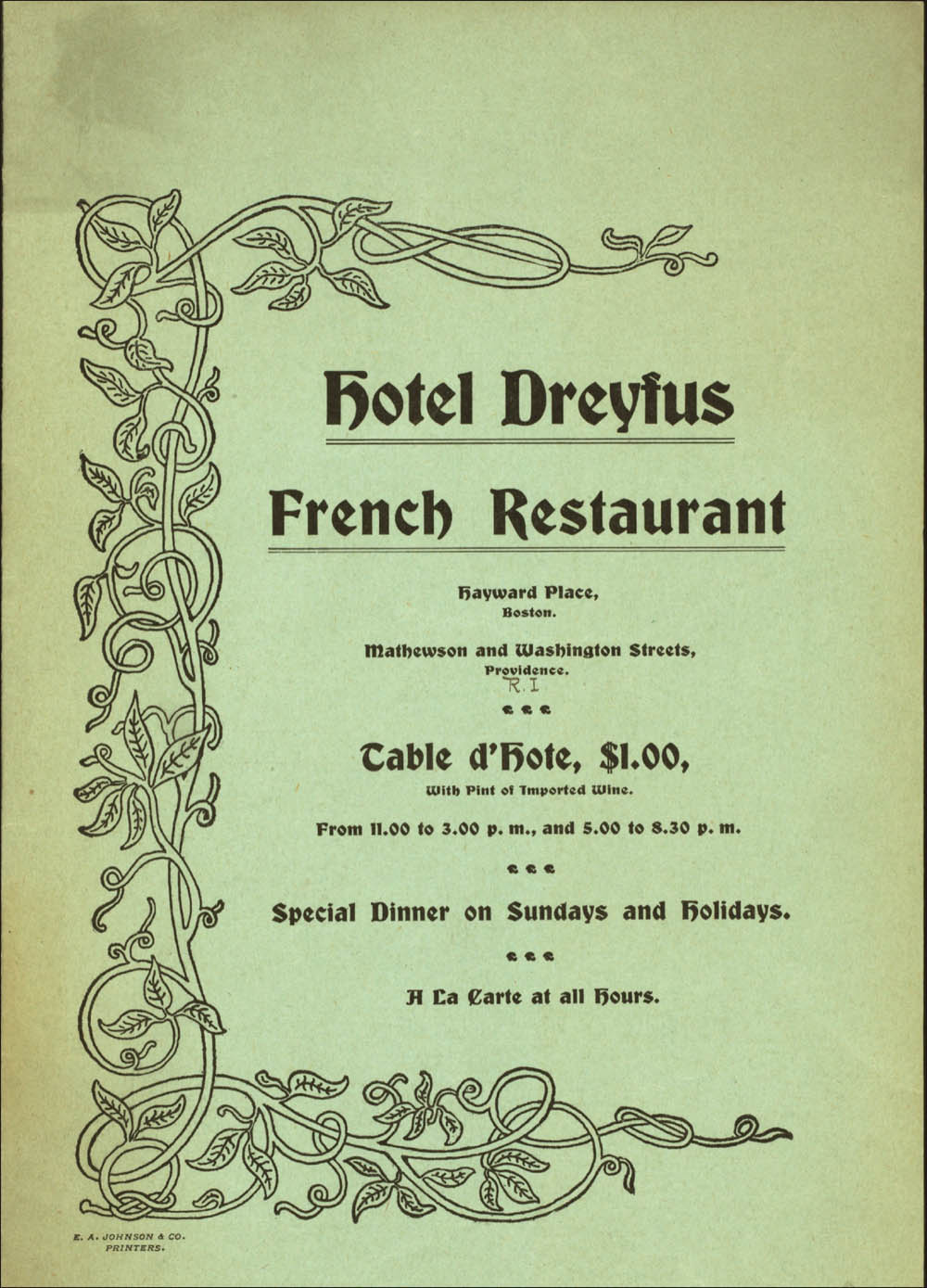 1901Menu Cover for the French Restaurant at the Hotel Dreyfus 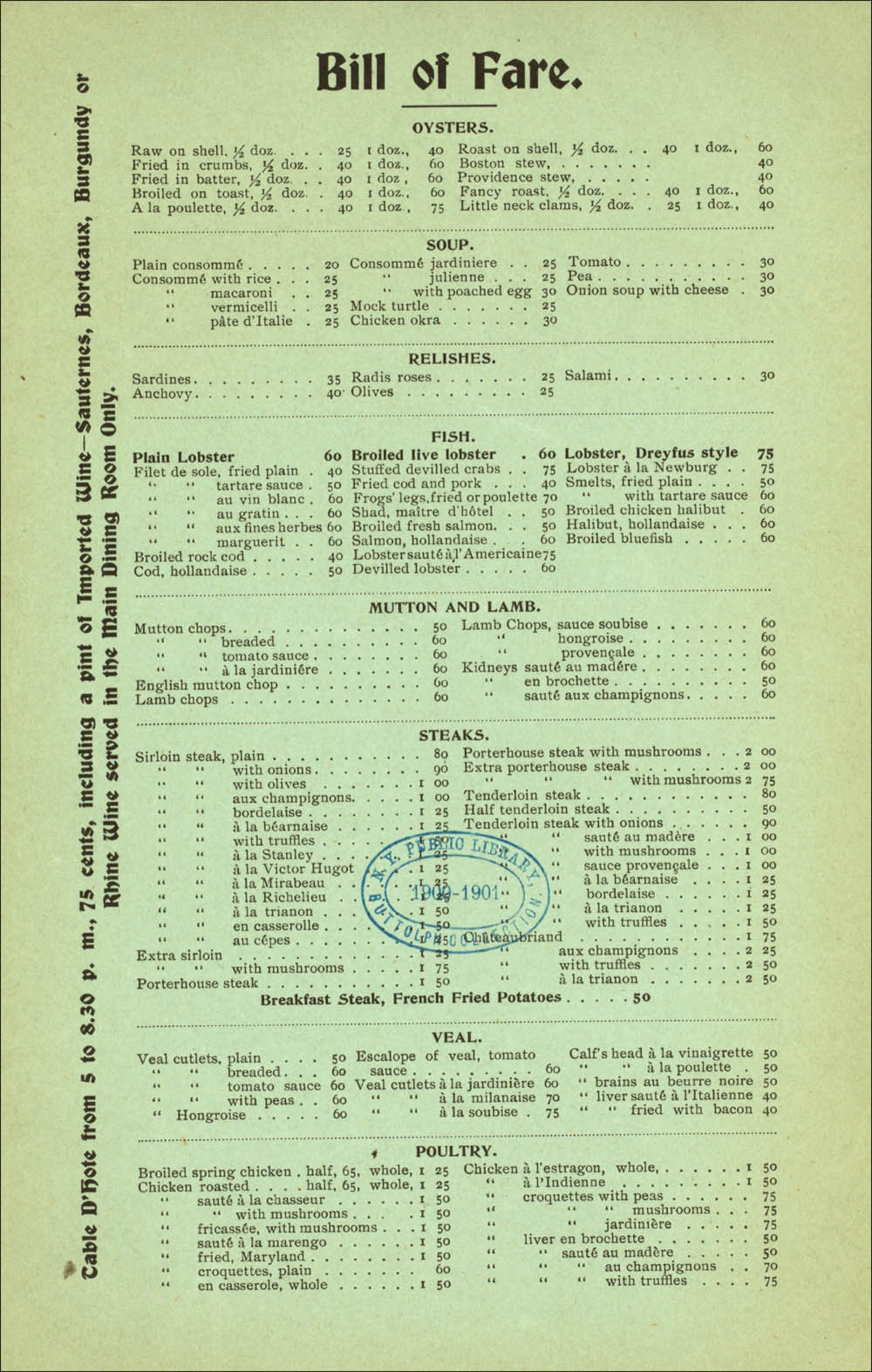 1901 Menu from the Hotel Dreyfus 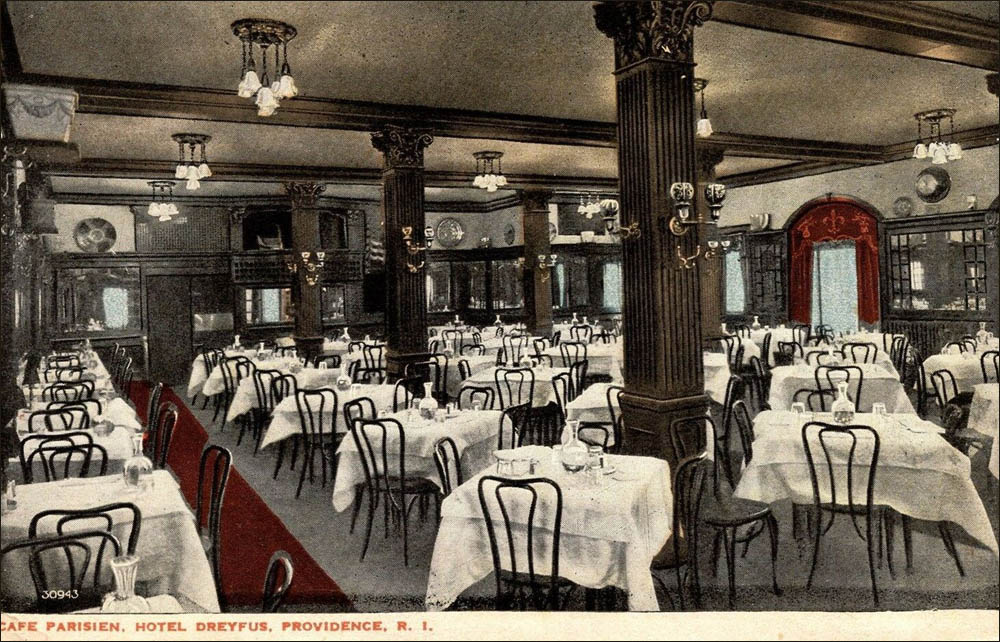 Cafe Parisien at the Hotel Dreyfus 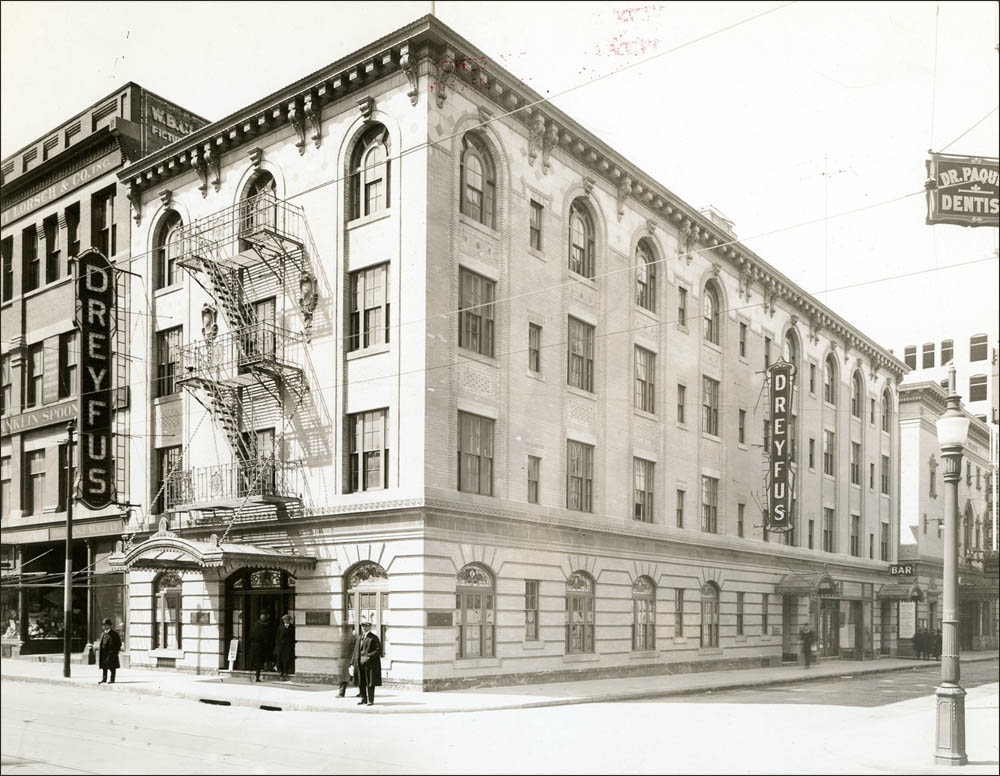 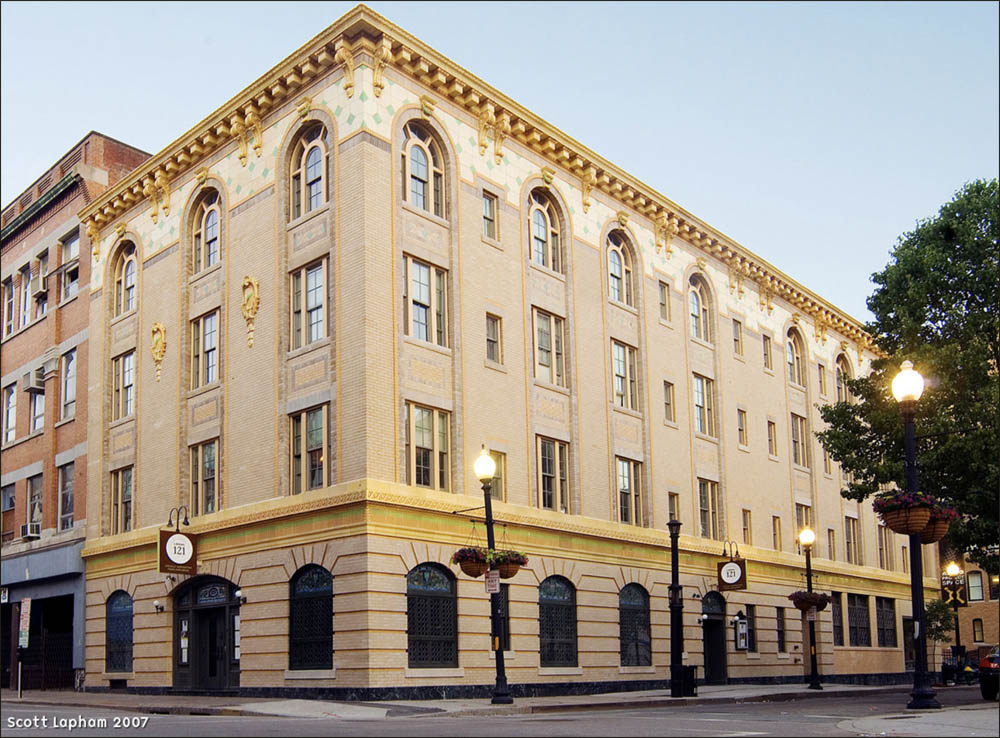 Notes:  The four-story Dreyfus Hotel opened in 1890, on the corner of Mathewson and Washington streets in Providence, Rhode Island. In 1917, it was expanded to about 50 rooms, with 25 private baths. The Dreyfus, with its restaurant and bar, was a popular hotel for traveling salesmen. From the time it opened until at least 1942, it was operated by various members of the Dreyfus family.

Around 1974 the Dreyfus Hotel closed, and the building was sold to Johnson & Wales University for use as a dorm. The dorm closed in 2000. In April 2005, the building was purchased by the nonprofit community arts organization, AS220. A massive $7.1 million restoration and adaptive re-use program was completed in May 2007.

The hotel china service was crested "Dreyfus" in green script lettering, with a return swash on the "S." There are green pin lines at the rim and verge.  Over the years this china was made by Greenwood, Maddock, Scammell, and Shenango.  There are minor differences in the script name by the different makers.

William Scammell's New England Contact Book gives the details of a Scammell order from June 3, 1925. " T/C-U/G-R/E " is the Lamberton Works code for "Trenton China-Under Glaze-Rolled Edge." The color is "Dairy Green." All of the pieces in this order are crested, except the butter pats. Adding the crests cost 35¢ per dozen. Tilden-Thurber Corp, of Providence, was the distributor.

Greenwood China was one of the earlier makers of this china, and their butter pats did have the script "Dreyfus" crest.  A. Weiscopf, of Boston, was the distributor for Greenwood.

Shenango pieces contain the green outlined version of the Indian back stamp.

Fragments of pieces made by Maddock Pottery were unearthed from the Lalor Street dump site that Maddock used from around 1912 to 1921.