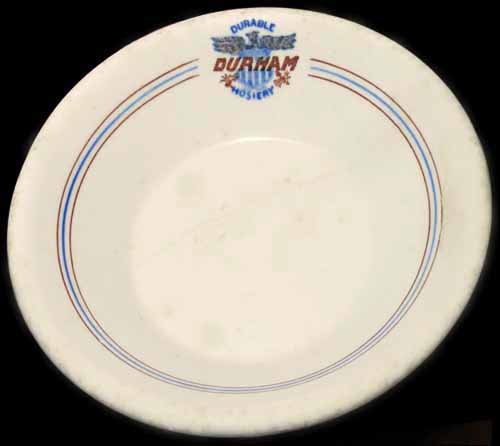 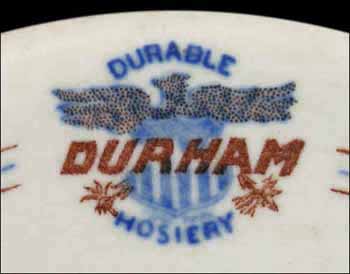 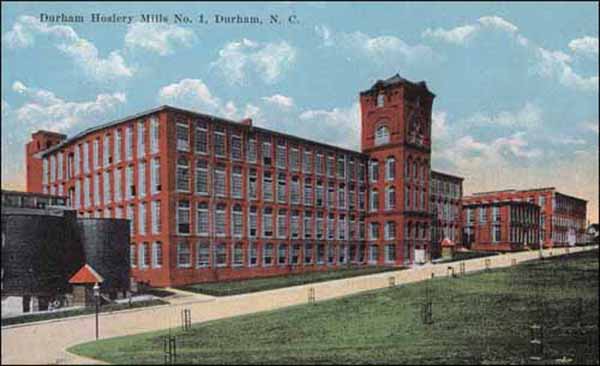 At one time, Durham Hosiery had 15 mills, including locations in High Point, Carrboro and Goldsboro, in addition to Durham, N.C. Its Mill No. 2, located on East Pettigrew Street in Durham, was successfully operated and managed by African-American employees – for its time an unusual and laudatory management decision made by Carr.

Though by 1940 the company business had dwindled down to just one mill that eventually closed as well, at one time Durham Hosiery was large enough that it hosted not only its own baseball team but also a brass band.

Mill No. 1 (see postcard above) is listed on the National Register of Historic Places and now (2010) provides housing for senior citizens as the Durham Hosiery Mill Apartments.

Off-white bowl has three concentric lines on its border – red, blue and red – intersected by the Durham Hosiery logo. The logo has a blue and white striped shield and eagle clutching arrows and wheat, with DURHAM in red in the center and DURABLE and HOSIERY at the top and bottom.