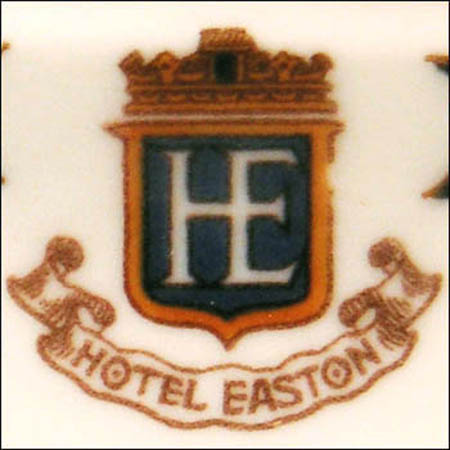 Notes: Located at 140 Northampton Street in Easton, Pennsylvania, the Hotel Easton, is known today as the Eastonian, according to an application for Historic Preservation Certification, granted on 12/12/07. The 200-room Easton Hotel opened on February 10, 1927 with a dining room, coffee shop, bar and ballroom.

According to the Historic Preservation Certification, "The hotel was abandoned in 1989 and remained closed for nearly a generation with significant damage on the interior and upper levels. In 2004 the building was acquired and renovated as condominiums with great care for the surviving historic features. The present use has restored the exterior brick and limestone facade, maintained the original entrance, lobby stair and lobby as well as the rear hotel restaurant while incorporating the front ballroom into two level apartment units. On the upper levels, elevators remain in the original position with units replacing the hotel rooms. Despite the shift from hotel to condominium, the building retains a high degree of integrity that makes it a contributing resource in its historic district."

White body celery tray with an orange rim pin line and an ornamental blue and brown design border. Topmarked with a decal shield, set within an orange-brown frame, with joined white letters "HE" against a blue background and "Hotel Easton" in brown, in a curved banner below. Scammell Lamberton China Oval impressed backstamp (S-L-19). The 1931 Scammell catalog lists the Easton as a customer.