IDwiki » All Contents » F » Ferguson, The 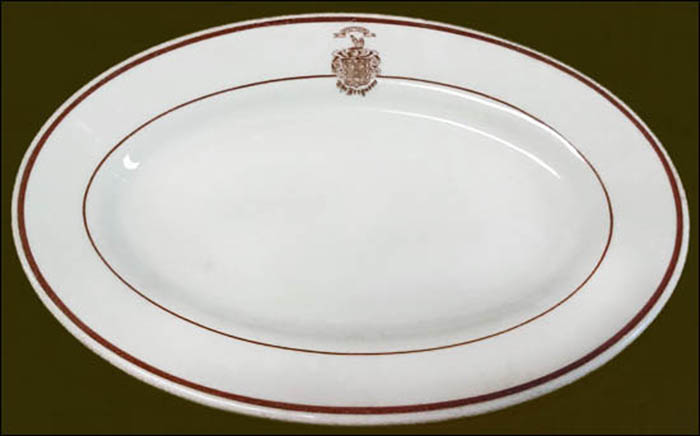 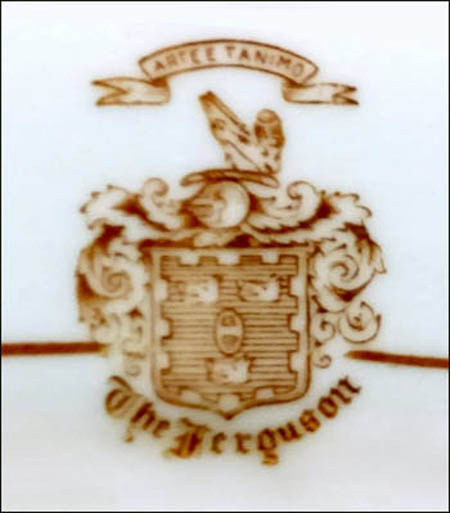 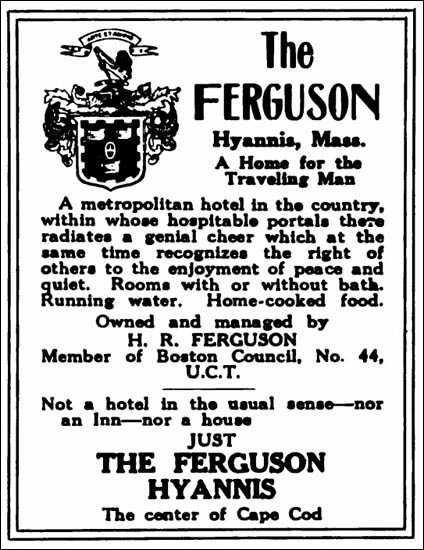 Notes: The Ferguson (variously and apparently incorrectly called Ferguson Hotel, Ferguson Inn and Ferguson House) was located in Hyannis, Mass., and described itself per the ad in the January 1922 issue of Cape Cod Magazine (shown above), as "A metropolitan hotel in the country, within whose hospitable portals there radiates a genial cheer which at the same time recognizes the right of others to the enjoyment of peace and quiet. Rooms with or without bath. Running water. Home-cooked food. Owned and managed by H.R. Ferguson. … Not a hotel in the usual sense – nor an inn – nor a house. Just The Ferguson."

It is not known when The Ferguson opened or closed, but ads show it open as early as 1916, offering $1.25 turkey dinners on Thanksgiving Day, for example, with accompanying music.

The crest in Cape Cod Magazine's ad matches the crest on the platter, which seems to be very similar to the Ferguson family crest. It is composed of a ribbon banner above the crest with the words (perhaps): ARTEE TANIMO. Below the crest in a Gothic font are the words: The Ferguson. All decorations are in a rust red or brown. The crest itself is a shield with three wolves or boars. (There is not enough detail to tell which animals are depicted, and both are shown as associated with the Ferguson crest, but boars seem to win out over wolves.) There is also an oval belt buckle. Above the shield is a torse and helmet for medieval armor and thanks to a menu on ebay, we can see what looks like a man's arm holding a bent spear above the torse. Acanthus leaves surround the shield.

This pattern has also been seen manufactured by Mayer China.