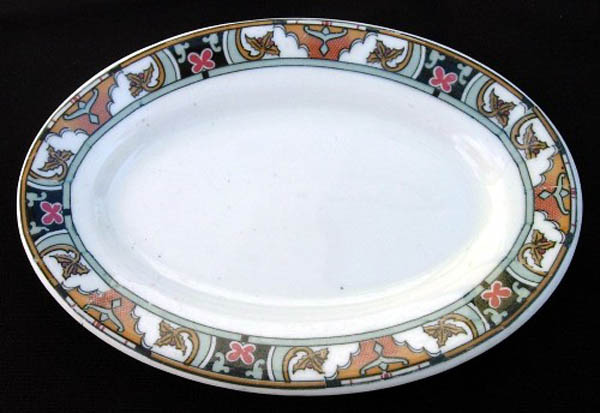 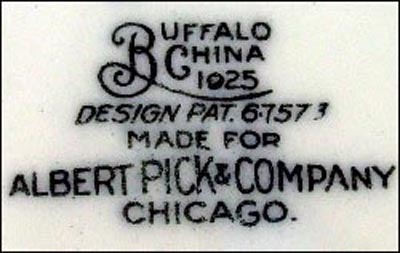 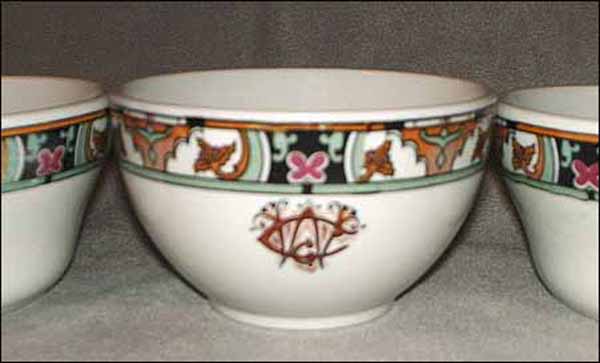 Notes: A 1932 Albert Pick-Barth catalog identifies this Buffalo pattern as Floridian, with the following description: "Buffalo Vitrified China, with rolled edge. Decorated underglaze with Spanish decalcomania border in black, blue gray, tan and red, consisting of conventional leaves and geometric figures in panels between a narrow tan broken band at edge and a blue gray band below." On white body.

(Editor's note: The last photo with the CGW topmark is being added here without its own IDwiki pattern listing because its identity has not been determined to the satisfaction of all – or even most – railroad experts.
It is believed to have been ordered for The Chicago Great Western in 1925 only and is currently being touted as such. The pattern name is said to be "Legionnaire" because it was ordered for the train by the same name. To have been manufactured for such a short run, it seems like a disproportional amount of the china is surfacing. But new railroad patterns are still being identified so it is not out of question that this particular topmarked piece might have been ordered for railway use. There is enough interest in the Floridian pattern that it seems appropriate to include this as yet unconfirmed ID, with the strong caveat that it is just that: unconfirmed.)

For related info:
Seminole Cafe to see this Buffalo China pattern with a custom topmark