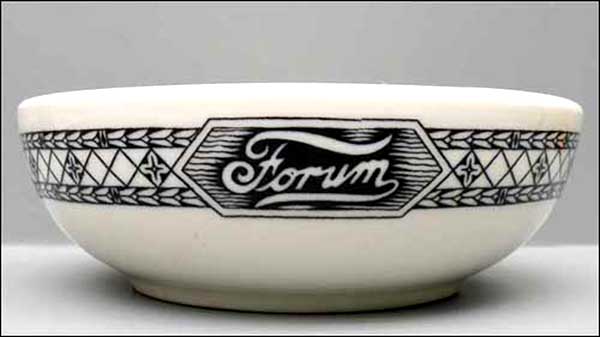 Notes: This handsome Art Deco pattern has been identified as having been produced for the Forum Cafeteria Co., located in Kansas City, Mo. From the Wikipedia article: "The Forum Cafeteria was a chain of economical cafeteria-style restaurants which operated across the United States. The company was founded around 1918 and had restaurants in the downtown areas of several major cities. In the 1960s the company expanded its business concept to suburban areas, opening shopping center locations at Antioch, Kansas and the Dadeland Shopping Center southwest of Miami.

"The company was founded by Clarence Hayman (1881-1971) who owned several restaurant venues before establishing the concept of a ground floor cafeteria, in 1921, at 1220 Grand Avenue in Kansas City, Missouri. He later opened similar branches in other Midwestern cities. Clem Templin (1884-1966) was a vice president of the firm. The building architect for the cafeterias was George B. Franklin (1883-1953)."

Probably the best known and certainly most beautiful was the Forum Cafeteria in Minneapolis that was located on South 7th St. The space was originally the Saxe Theater, which was built in 1914 (name changed soon after to the Strand). The theater was converted to the Forum around 1930 and was open through the mid-1970s.

Based on this shard, it is clear that this pattern was used at the Minneapolis location, but it is not known if this was used at all of the chain's cafeterias, or for how long.

The cereal bowl has a black and white Art Deco motif that runs around it, interrupted by Forum in a script font that somewhat resembles that used by Ford Motor Co.