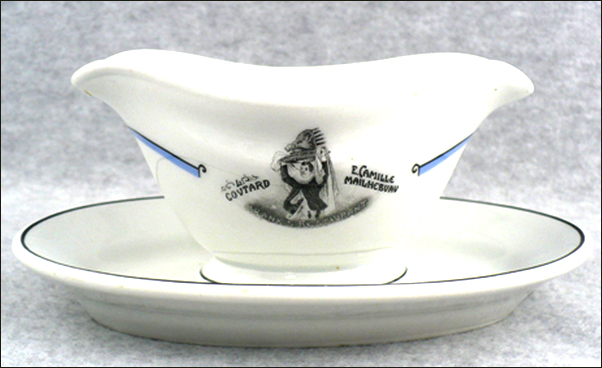 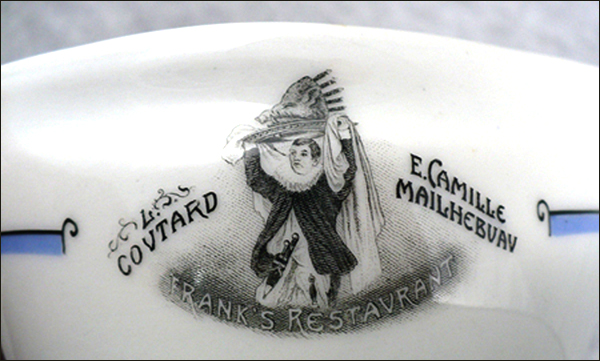 Notes: A very rare piece made by Bauscher China for Frank's (Rotisserie) Restaurant that was located in San Francisco, California. Believed date is 1906, that was the first year that we can find this distributor Parmelee-Dohrmann, although it may be even older. Frank's was owned by Louis Coutard and Camille Mailhebuau and opened about 1878. This restaurant was destroyed in April 1906 in the San Francisco earthquake and fire. Louis Coutard and Camille Mailhebuau later opened other restaurants, one of them being the very famous Bergez-Franks Old Poodle Dog (not to be confused with the Poodle Dog Cafe and Bakery  in Victoria, British Columbia).

White body with blue and black decoration. It says Frank's Restaurant in a banner under the picture of a man dressed in robes and a belt with knives holding a tray with a boar's head on it. It says L. Coutard on one side of the man and E. Camille Mailhebeau on the other (the owners names… L. for Louis. Camille went by his middle name, the E. stands for Evarist).

Louis Coutard was also the inventor of the famous Louis Dressing.

Not many pieces of this china would have survived the San Francisco earthquake of 1906. Perhaps a patron took it as a remembrance of a wonderful dinner there, or perhaps a family member or employee took it home prior to the earthquake.

Click here and here to find info about Frank's, from the History Smith website owned by James Smith.