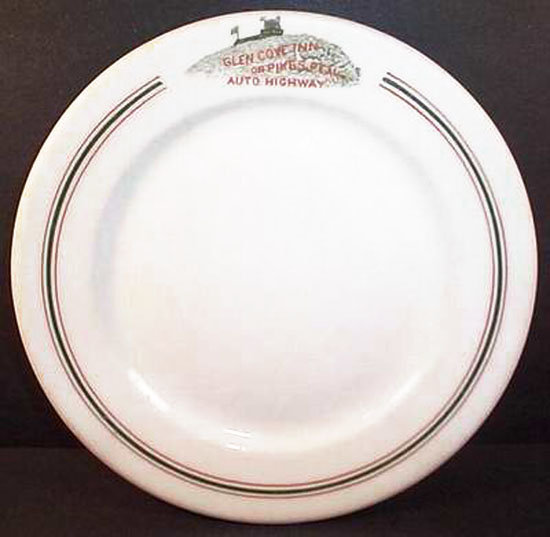 Notes: The Glen Cove Inn is located on the Pike's Peak Automobile Highway on the Mountain at Colorado Springs, Colorado. The inn was constructed in a large log cabin / log inn style that blended in with the surroundings quite well. The Glen Cove Inn became one of the most popular places (midway) to stop for dinner, to relax, or just take in the scenery while traveling the 19-mile Pikes Peak Highway (touted as the world's highest toll road) up and back from the Peak.

The Restaurant was originally managed by the United States Forest Service and was built in the late teen to early 1920's after the automobile road had been completed in 1916. After 1961, the City of Colorado Springs operated the restaurant / inn. During the time that this plate was made, the Inn was under full control of the Forest Service. Today, the Inn is still in operation and is called the Timberline Inn at Historic Glen Cove Inn.

The plate features a highly detailed top logo at the 12:00 o'clock position that shows the Inn and reads "GLEN COVE INN ON PIKE'S PEAK AUTO HIGHWAY".