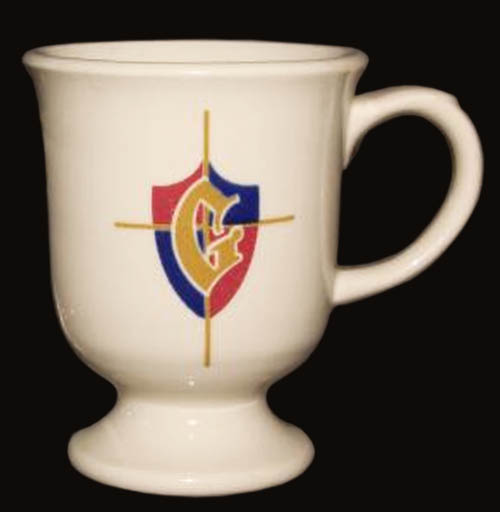 Notes: Glenwood Manor, which billed itself as Kansas City's Luxury Motor Hotel, was built circa 1962 at 9200 Metcalf Ave., in Overland Park, a suburb of Kansas City, Kan. A Nov. 4, 1963 story in The Iola Register referred to the architect for the hotel complex as Richard Wells.

The hotel included convention and banquet facilities and was adjacent to the popular Glenwood Theatre complex.

By 1982, according to the Ottawa Herald, the hotel had become the Regency Park Hotel. It is not known when it closed; the last reference found was 1987. Today (2013), the original building is gone and the address is for the Regency Park Shopping Center.

The pedestal mug has the initial G in yellow gold set against a four-part shield in red and blue. Two yellow gold lines intersect behind the G and in front of the shield.