A Salute to Harry G. Aitken by Larry R. Paul 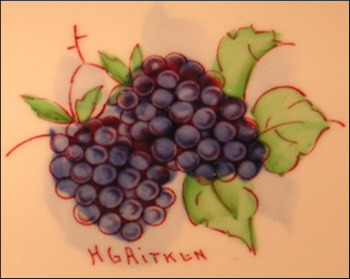 Harry G. Aitken is best known for his Nature Studies series, bird and floral designs produced by Syracuse China, while he was in charge of the design and decoration department. The fruit illustration above is one of the few designs that features his signature. Although details of Harry's life have been noted in connection with some of his better known designs, a closer look at the life of this extremely talented artist, reveals how he expanded the way china companies thought about designs for their products.

Harry G. Aitken was born in Trenton, New Jersey on July 12, 1867 to Charles R. and Abby Aitken. He graduated from high school in Trenton around 1885. He then went to work for Lenox China, where he was employed for five years. Around 1890, Aitken left Lenox and worked for Trenton China Co., Crescent Pottery Co. and Trenton Pottery Co. In November 1895, he married Carrie E. Lee.

In 1904, James Pass, head of Syracuse China, hired Aitken, who was then 37 years old, to replace Louis A. Cowan as head of the decorating department. Aitken began by making a number of improvements to the operation of the transfer press in the decorating department and updated the color process. A number of the Syracuse patterns designed by Harry Aitken were copyrighted or patented, providing a record of his involvement and the date of the design.

In 1924, Aitken introduced a new concept in commercial china decorating, hand-filled designs. 'Peasantry' (P-1), a primitive-style floral design was the first of this new series. The original designs in this series used a pounce paper technique to apply the design to the bisque china. For this process, the design was drawn on paper, then a pounce wheel of tiny needle-sharp points was rolled across the design, punching a line of holes through the paper. The paper was laid on the china and powdered charcoal was rubbed through the holes. The decorators then followed the dots with their colors to create the finished design. This process was labor intensive, so new designs used transfer line designs. Eventually some of the most popular designs were produced as decals.

There were 26 of the Aitken P-series designs by 1927. That number increased to 116 by 1933. In 1941, the series contained 188 designs, but by that time new techniques were replacing this style of decoration.

In 1929, Aitken painted poppies that were growing in his garden and used them as the inspiration for a new series of twelve service plate designs, known as The Nature Studies. He described this process in Syracuse China News, the company newsletter: "The decoration of the poppy starts with a freehand engraving on steel, from which we print. It is then ground laid (with solid colors), painted by hand and lined, all of these processes being under the glaze, after which we snap up a brilliant highlight in (overglaze) enamel color, which is the finishing touch." The Nature Studies series eventually included forty designs depicting flowers and birds. This same floral treatment was used by Aitken when he designed the 'Portland Rose' and 'Columbine' patterns for Union Pacific Railroad's 'City of Roses' and 'Columbine' named trains.

Aitken began his 'Shadowtone' decoration technique in 1937, perfecting it in 1938. This mass production process used an airbrush machine to spray colors through stencils. Individual metal stencil masks were hand cut and fitted to the contours of each piece in the forty-six piece Econo-Rim line. The 'Rose' pattern, for example, used two stencils for its two-color design. Aitken created almost three hundred different Shadowtone designs.

World War II production at Syracuse was more about producing china to meet the demand than about decoration, but Syracuse set up three new committees to develop product shapes and decorations for post war introduction. These were the Management Council, the Quality Club and the Art Council. James Pass headed up the Art Council, which included Harry Aitken, Guy Cowan, Douglas Bourne, Charles McKaig, and others from the design department, along with representatives from lithography and sales.

In 1946, at age 79, Atiken retired from Syracuse China. He continued to pursue his passion for art and design in his water color and oil paintings, some done on ceramic tiles. His work was exhibited at the Syracuse Museum of Art, and he was a member of the Printmakers Club and Associated Artists of Syracuse. It is safe to say that during his 44-year employment at Syracuse China, he totally changed and expanded the way commercial china is decorated.

Harry G. Aitken died on June 7, 1952 and is buried at Riverview Cemetery back in Trenton, his home town.