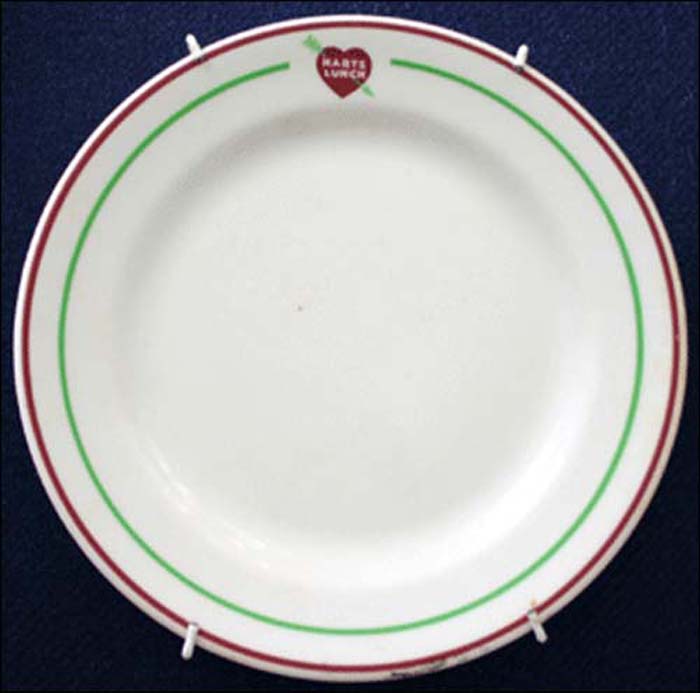 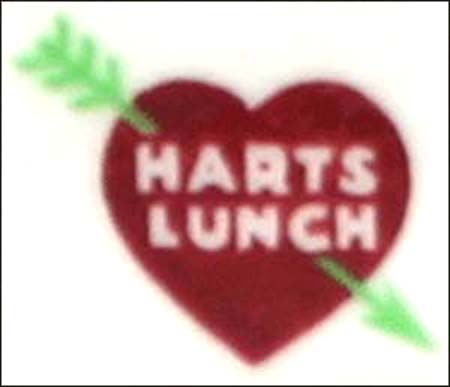 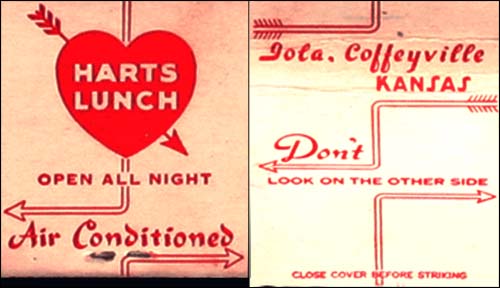 Notes: Harts Lunch was founded in 1932 by Dave Hart, according to a story in the Aug. 13, 1940, issue of The Iola Register that devoted an entire page (including story and display ads) to renovations completed at the café, with the headline: "Congratulations, Dave, On Your Ultra-Modern Café!" (The name on the china is "Harts Lunch" without the apostrophe; the newspaper used both "Hart's Lunch" and "Harts Lunch" in referring to the restaurant.)

The story said that the Iola, Kansas, restaurant had received a "remodeling, redecorating, and almost complete rebuilding and refurnishing," making the building "now one of the finest restaurants to be found in this part of Kansas."

"Besides the exterior and interior beauty of the place, which has been enlarged to seat 60 persons at the counter and booths, there are many new features which add much to the establishment," including air-conditioning, thermostatically controlled griddles and fryers.

With its backstamp that would span from the 1920s to the 1950s, it is likely then that this china pattern was initially purchased during the 1940 renovation. Corroborating that, RWCN member Robby said his parents – Mr. and Mrs. Clarence Robinson – bought the Iola café from Dave Hart around 1951, and he noted that this pattern "was in use from 1940 till about 1960 when a more modern pattern was used."

The last mention of the restaurant found online was in 1964; however, it is not known when it actually closed. A mention in the Sept. 9, 1993, issue of The Register noted that the former cafe's location in that year was "a vacant lot south of the Kress Building" on "the east side of the square."

Click here to see a photo of the building.

The white plate has a dark red line forming a circle around the rim. Halfway between the rim and the verge is a bright green line of equal size that it interrupted at 12 o'clock with the logo: a dark red heart with the words in all caps in white, HARTS LUNCH, one over the other. An arrow in the bright green begins over the H in Harts and comes out diagonally under the C in Lunch.

The matchbook shown below that advertises "24-Hour Service" shows a Coffeyville, Kansas, location in addition to the one in Iola, but no record of this second venue has surfaced yet.

Photos and ID contributed by Brad