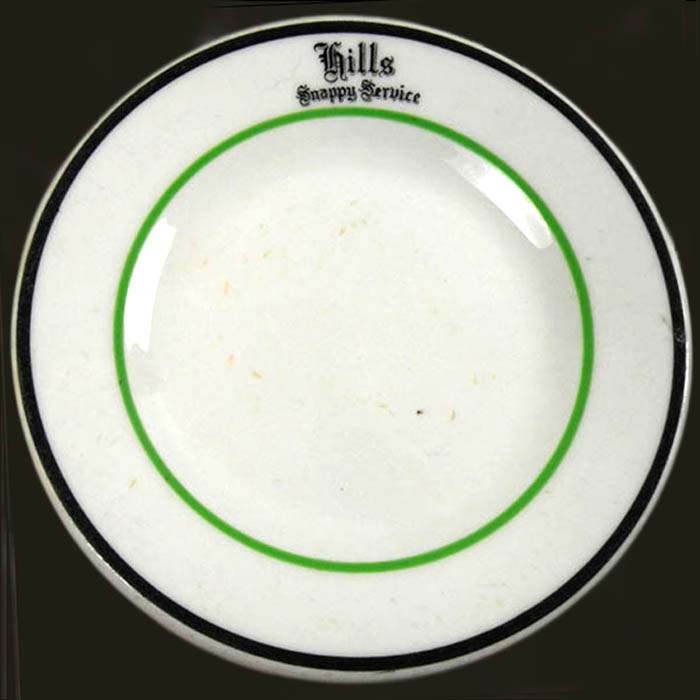 Notes: Based on "Fast Food: Roadside Restaurants in the Automobile Age," by John A. Jakle and Keith A. Sculle, Paul C. Hill created Hill's Snappy Service in 1925 with $100 of inheritance, opening the first of what would become a Midwest chain in Trenton, Mo. Two more would follow in quick succession in Trenton, with more restaurants added in Missouri, Indiana, Tennessee and Illinois.

"Chili, coffee and pie were served" at the restaurants, "but it was 'nickel hamburgers' that "distinguished" the menu. "High volume-sales of a few simple foods was Hill's aim rather than high-priced, elaborate dishes. 'Buy 'em by the sack' remained Hill's slogan, taken from White Castle."

Hill's business "peaked in profits during World War II," but partly due to Hill's refused to add drive-through windows, the chain declined over the next decades. As the author noted: "Hill failed to come fully to grips with the automobile."

The last of the chain, in Terre Haute and Kokomo, closed in 1983.

The pattern has a wide black line on the rim and a bright emerald green, wide line on the verge. In between, in a Gothic or Old English font is Hills and underneath, centered, Snappy Service. (There is no apostrophe in Hills on the china, but photos of the stores themselves and their matchbooks show the apostrophe.)

ID and photos by Susan Phillips