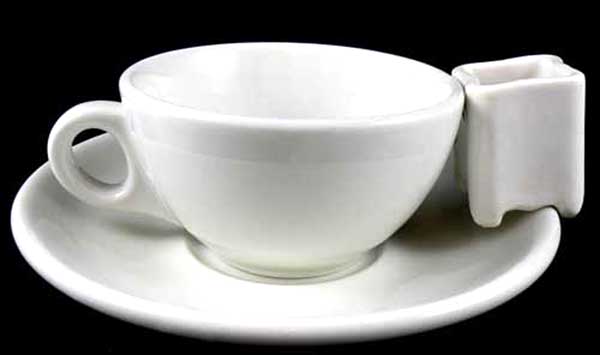 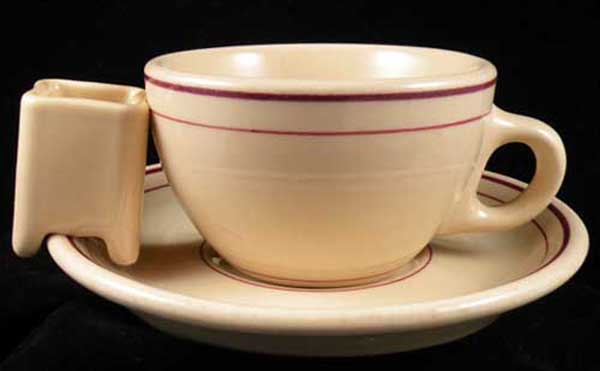 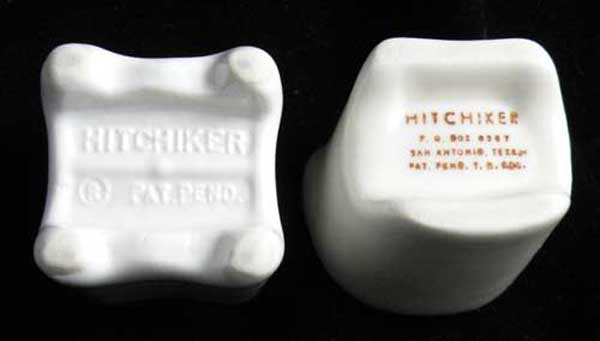 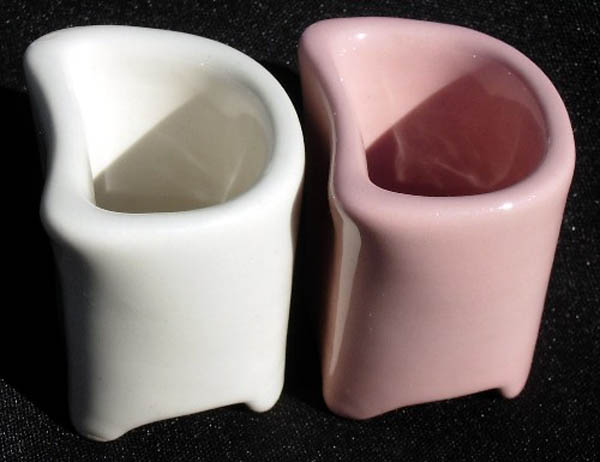 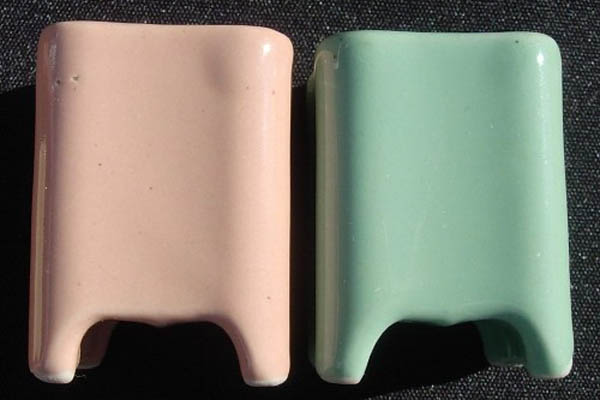 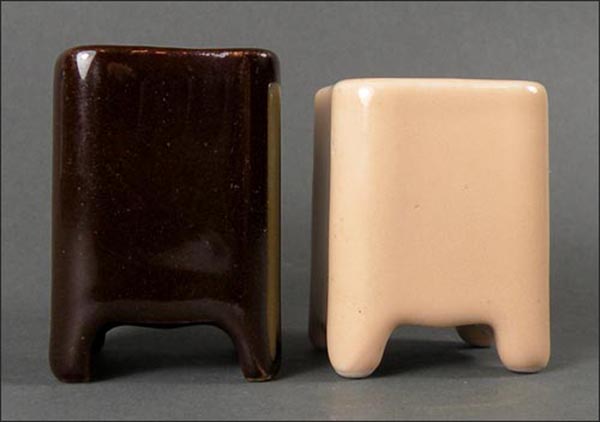 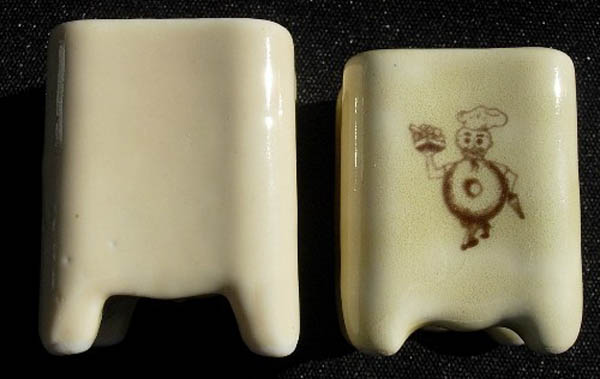 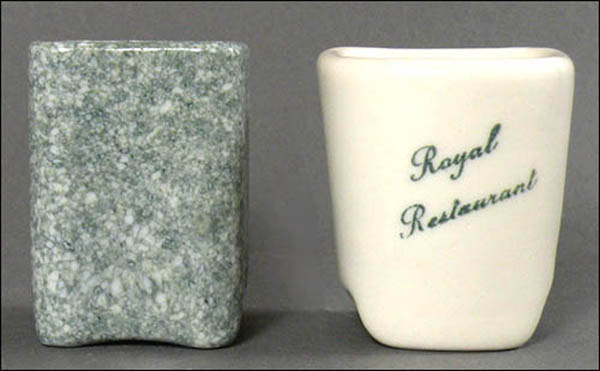 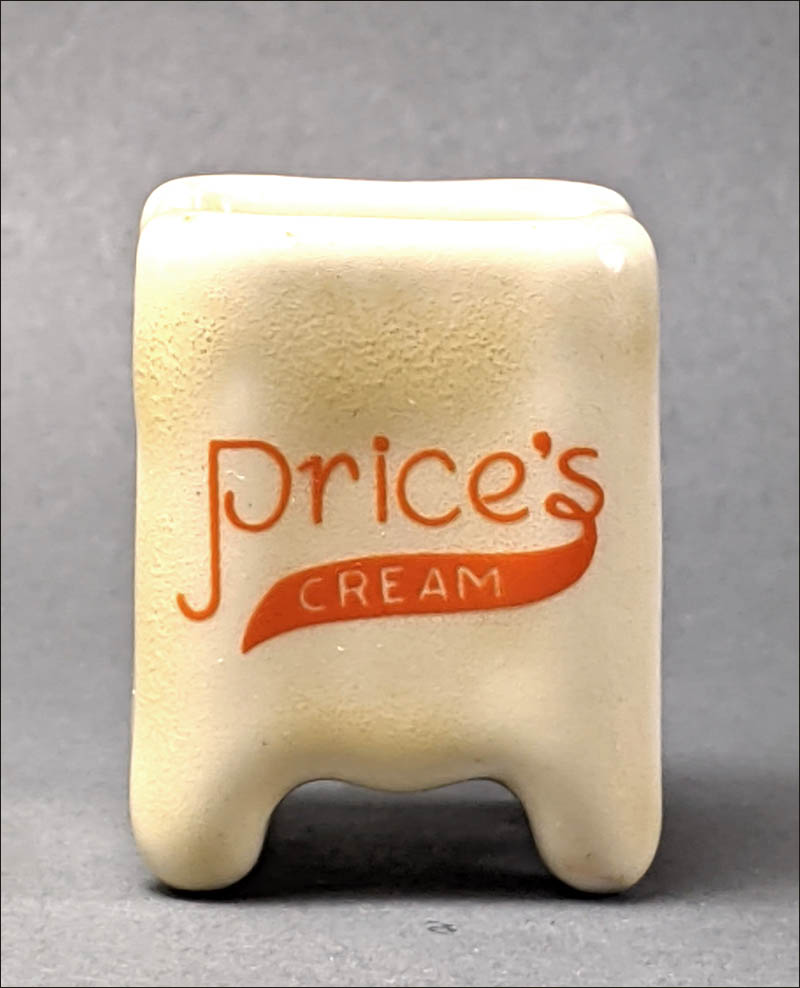 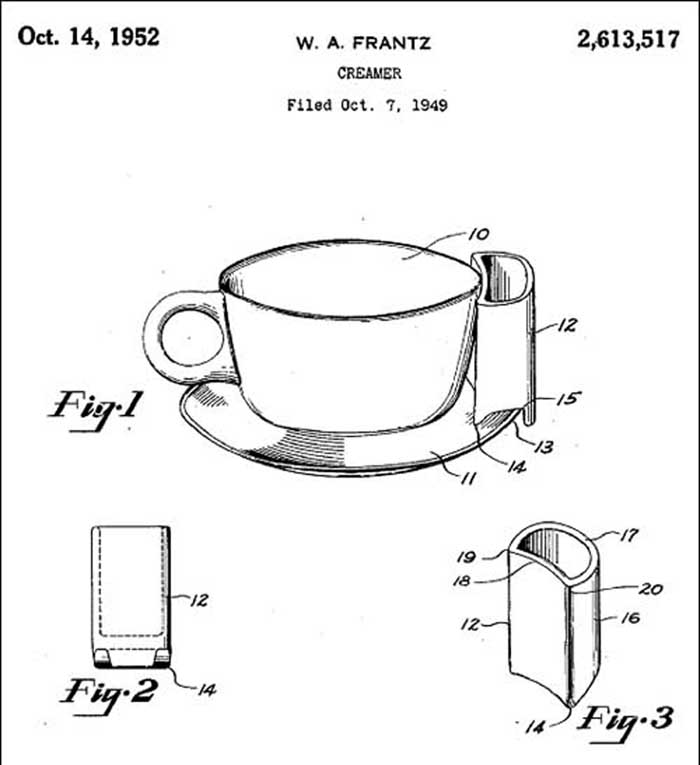 Notes: Before half-and-half was packaged into little soulless, individually-sealed plastic tubs that waitresses could throw into their apron pockets, there were Hitchiker creamers, made by the Hitchiker company in San Antonio, Texas. Unlike the small glass creamers with cardboard tops that were supplied by dairies, these single-serve vitrified china creamers had at least one concave side and were designed to snuggle against a cup of coffee with their feet perched on the edge of the saucer.

Restaurants could buy cream in bulk and individually fill the Hitchikers, and serving them alongside a cup of coffee saved waitresses extra trips to and from the kitchen. In addition, there was probably less waste using Hitchikers as opposed to the larger and more common china creamers. In spite of these advantages, however, based on their rarity it doesn't appear that Hitchikers ever really caught on.

The only ones that have been seen to date were made by the Hitchiker company in San Antonio, Texas. The Hitchiker name was either printed on the bottom of the creamer or pressed into the clay in bas relief.

They were made in variations on two basic shapes: ones with a crescent shape, and ones with four concave sides. Some had different heights, wall thicknesses, and there were slight differences among the feet, too.

They are found most often in plain white. Other known colors are tan, peach, pink, green, yellow and a textured granite green. Rarely, topmarked ones have been found. They are often confused with toothpick holders or birdseed holders! In addition, they are frequently – but incorrectly spelled – Hitchhiker.

A new addition is the fake/fantasy piece made for Price's Creameries. You can feel the decals (a cow is on the other side) and see the glaze bubbles and yellowing of the glaze, all signs that a white Hitchiker had the decals applied post-production and with subsequent firing flaws.

Based on his drawings (shown above) filed with the U.S. Patent Office, it appears that the Hitchiker inventor was Walter A. Frantz, of Shaker Heights, Ohio. He filed an application on Oct. 7, 1949, that was patented Oct. 14, 1952. Click here to see the patent. It should be noted, though, that the name Hitchiker does not appear in the application.

ID and photos contributed by reddygal and Susan Phillips