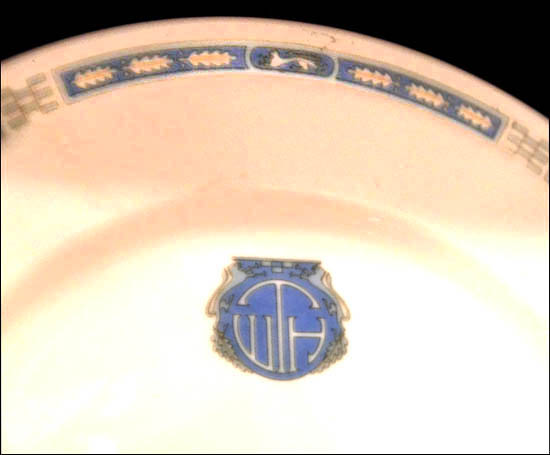 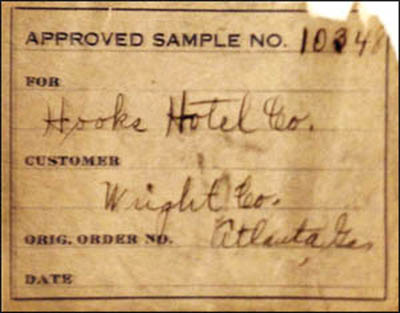 Notes: The WTH monogram on this plate stands for T. W. Hooks, who was president of the Hooks Hotel Co., which operated at least four hotels in Georgia:

T.W. Hooks' name appears in Hotel Red Books as early as 1906 and as late as 1942. He appears to be the lessee of the hotels rather than the owner, although this is not made clear in the HRBs. Letterheads dated 1922 for the Dublin list T.W. Hooks as proprietor and J. S. Hooks as manager, and for the Lanier, T.W. Hooks as manager.

The Dublin and Lanier operated on the American and European plans, the Plaza and Central on the European, but all operated dining rooms. Because the crest on the china did not mention any hotel by name, it could have been used in all Hooks-operated hotels.

The plate is crested with a blue and gray circular frame with stylized crown on top. The blue center contains a white WTH monogram with a large T in center, flanked by smaller W and H. The outer edge strokes on each letter conform to the circle. The border pattern is #70504 Mistic pattern. (In looking at old Syracuse catalogs and backstamps, it is clear that Syracuse used the spelling Mistic and Mystic interchangeably. We are giving preference to the Mistic spelling because that is the one adopted by the authors of the leading books on railroad china and therefore the one now more often used.)

Sources:
The plate is a production sample, in the collection of Fishs Eddy; and
Hooks Hotel postcards and letterheads found on eBay on June 14, 2015