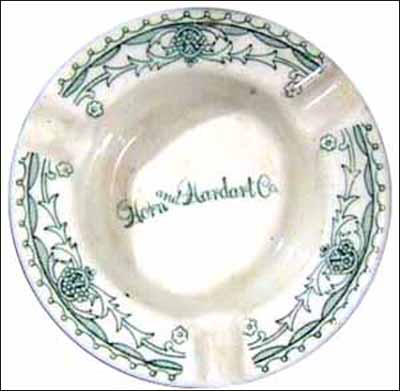 Topmarked pieces are among the most coveted. 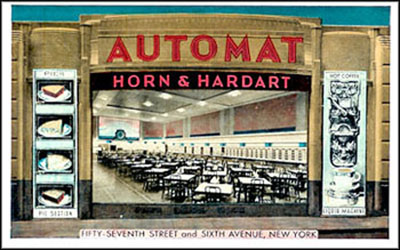 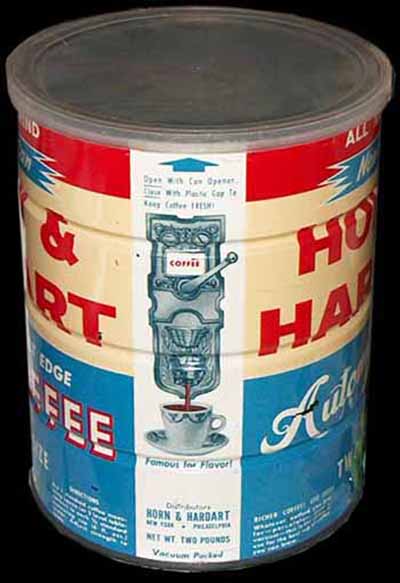 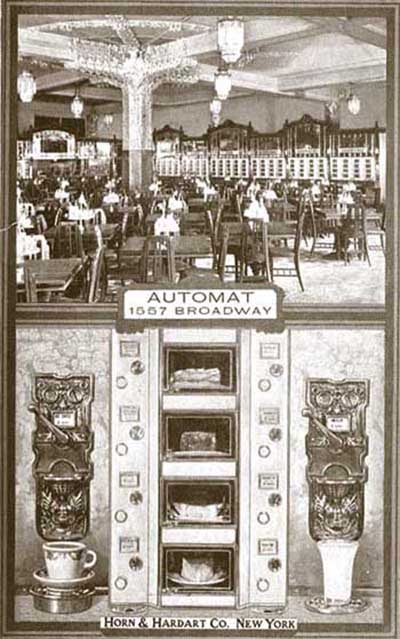 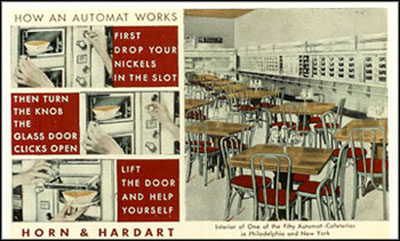 In this tiny detail from the postcard that follows, you can see the same pattern in the cup and saucer. 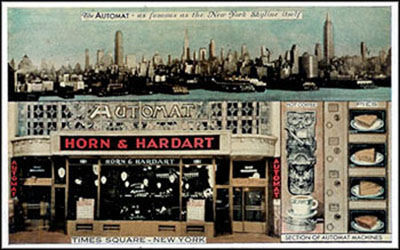 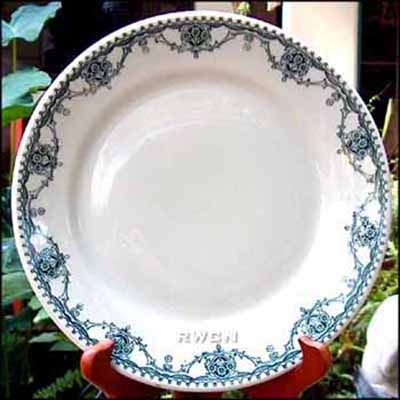 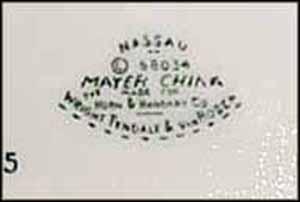 Mayer made the Nassau pattern, too. 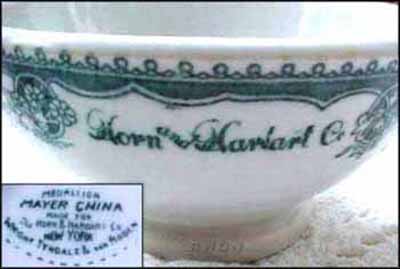 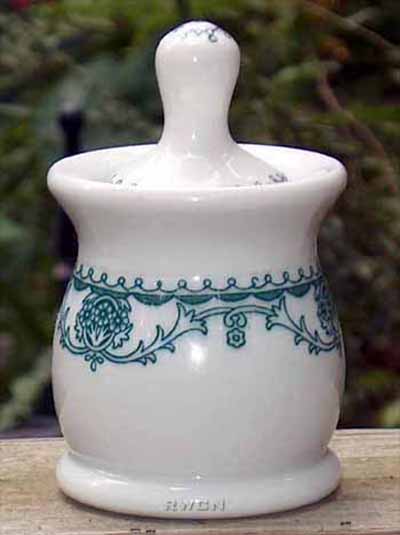 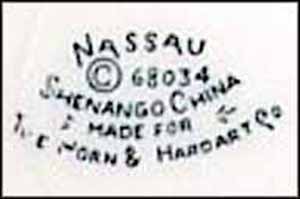 Shenango made the Nassau pattern. 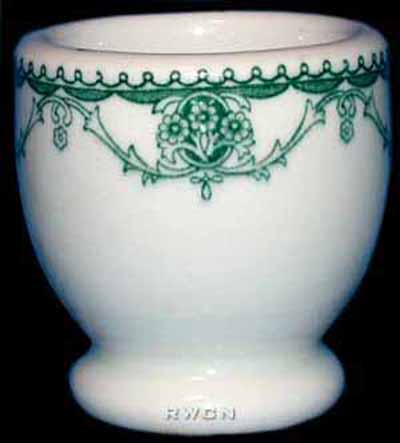 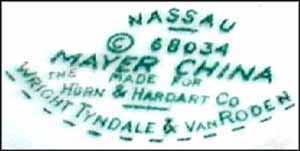 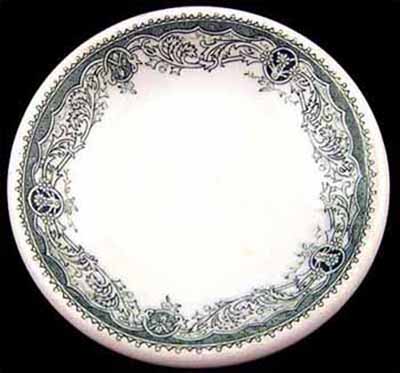 This small bowl adds a non-USA manufacturer to the known makers of H&H china: Grindley. 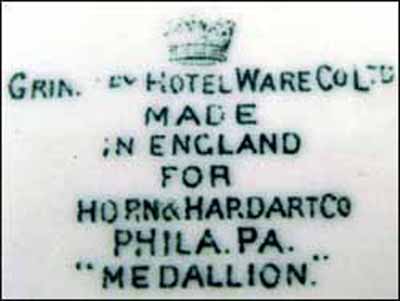 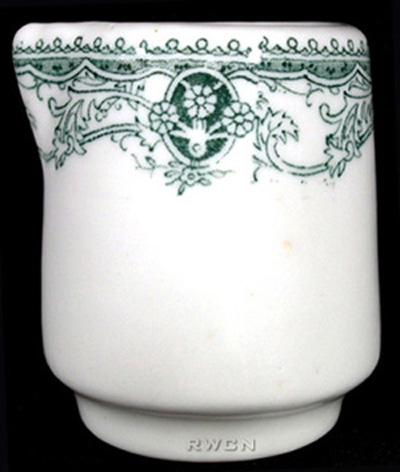 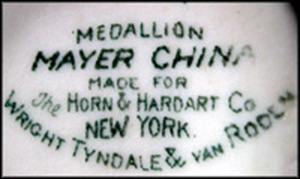 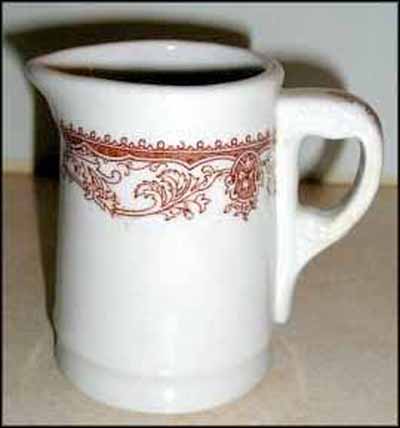 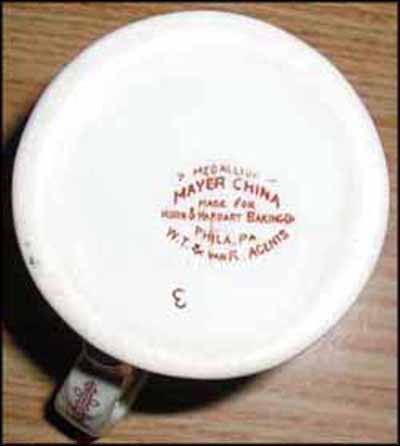 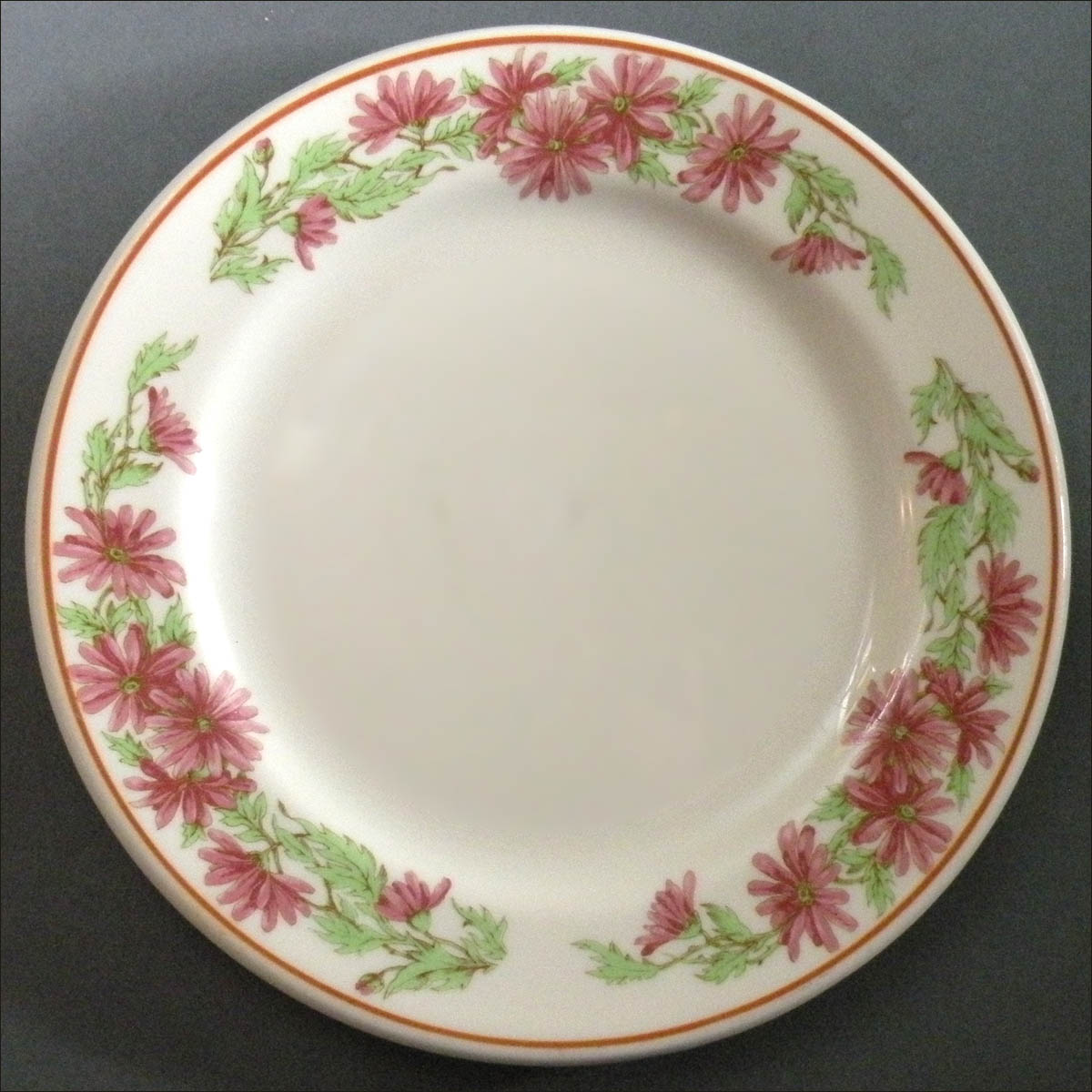 Old Ivory Syracuse China pattern has been identified as #90801, made for H&H.

This pink flowered pattern was identified in a Syracuse underglazed pattern binder as #90801, made for Horn & Hardart. 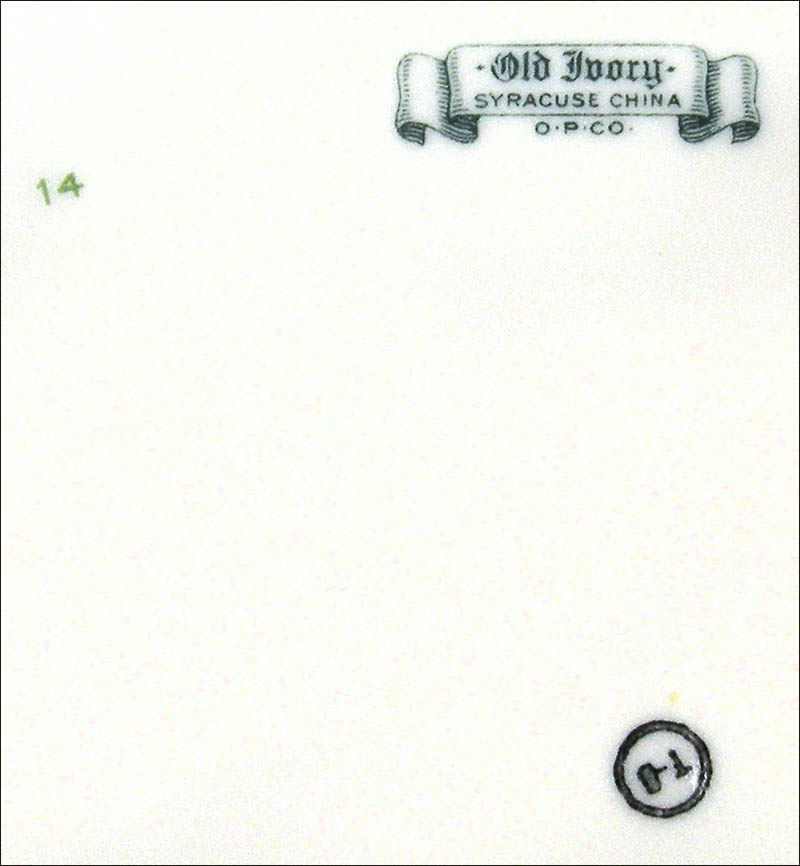 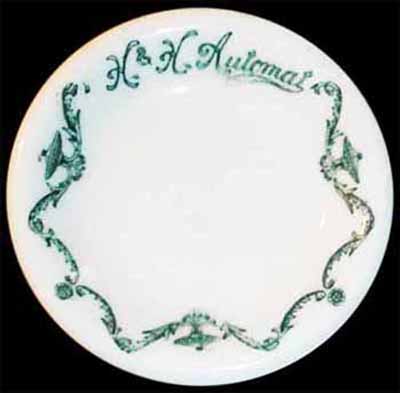 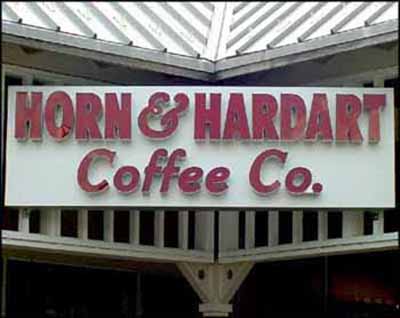 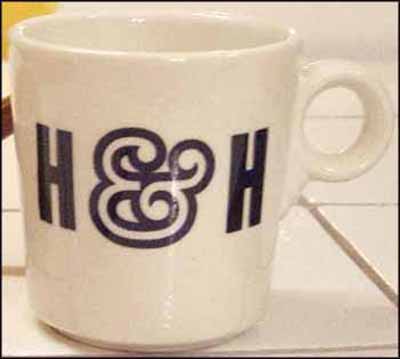 The authority on all things Horn & Hardart – except seemingly its china – is the book by Marianne Hardart and Lorraine Diehl, "The Automat: The History, Recipes and Allure of Horn & Hardart's Masterpiece." Refer to it for the history of the company and its locations in New York, Pennsylvania and New Jersey.

A 1921 ad in Plant-Restaurant Management for The Stearnes Company in Chicago touts its outfitting of "Horn & Hardart's new Automat and Cafeteria on Sheridan Road near Wilson Avenue, Chicago." (See ad above.) And Jan Whitaker, writing in a September 8, 2019 piece for her Restaurant-ing through history, confirms the presence of two Horn & Hardarts operating in Chicago in 1922.

The last automat closed in 1991. The automat used distinctive green-on-white patterned china in ever-so-slightly different variations carrying three known names: Marion, Nassau and Medallion, all made by Mayer; and Nassau, made by Shenango. Confusion arises in that these two companies, plus Homer Laughlin, Syracuse and Ohio Commercial Company, also made the same or very similar patterns that were not backstamped for Horn & Hardart.

In addition, an H&H-backstamped Medallion pattern made by Grindley has now surfaced.

Were all these patterns ordered for Horn & Hardart? Were any non-backstamped versions used there? The purist's proper conclusion in the absence of facts would be that unless a piece is found with an H&H backstamp – or in the case of very few ashtrays and bowls, topmarked – the china cannot be considered to be authentic H&H. But some advanced collectors believe that later in its history the automat did order its china without either topmarks or backstamps.

To add to the confusion, an example of the Medallion pattern in brown has been found, backstamped for H&H. In addition, there are clear photos of Syracuse's St. Elmo pattern on page 53 of the Hardart book and on the label on H&H coffee cans, even though no H & H-backstamped pieces of St. Elmo have been found. And there are clips from several old movies online that clearly show St. Elmo in use. But were they props and were these movie sets?

The mystery of the St. Elmo pattern's use at the automats has been solved by filmmaker Lisa Hurwitz in her movie The Automat. Numerous clips included from unidentified automats clearly show St. Elmo in use. As with many stock patterns, use by the automat of any one piece cannot be determined but the fact that it was ordered for some locations cannot be denied.

And one more mystery: In the Hardart book, the Delmar pattern by Syracuse is featured in one of the promotional photos, from the movie, "Affair with a Stranger." Was it ever used in one of the automats? What do any of the mysteries mean? Probably that each automat was responsible for ordering its own china. If a distributor was out of what we think of as the H&H pattern, something else green and white – like St. Elmo – could have been substituted. 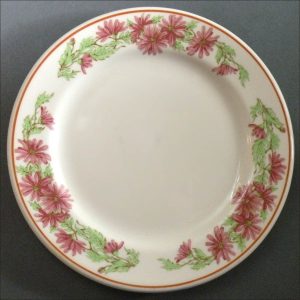 And shown at left, this completely different, quite atypical pattern has been found, made by Syracuse China. It is pattern #90801, identified in a binder of Syracuse patterns with Horn & Hardart clearly added.

The first Horn and Hardart Automat opened June 12, 1902 at 818 Chestnut St., in Philadelphia, PA. The first Automat in NYC opened 10 years later at 1557 Broadway, Times Square, between 46th & 47th St. The distributor noted in the backstamp, Wright, Tyndale and Van Roden, was based in Philadelphia, and went out of business circa 1928. As this backstamp occasionally specifies NYC, it seems that the distributor provided the china for both locations.

Click here to read a story about the Horn & Hardart history in the August 2001 issue of Smithsonian magazine.