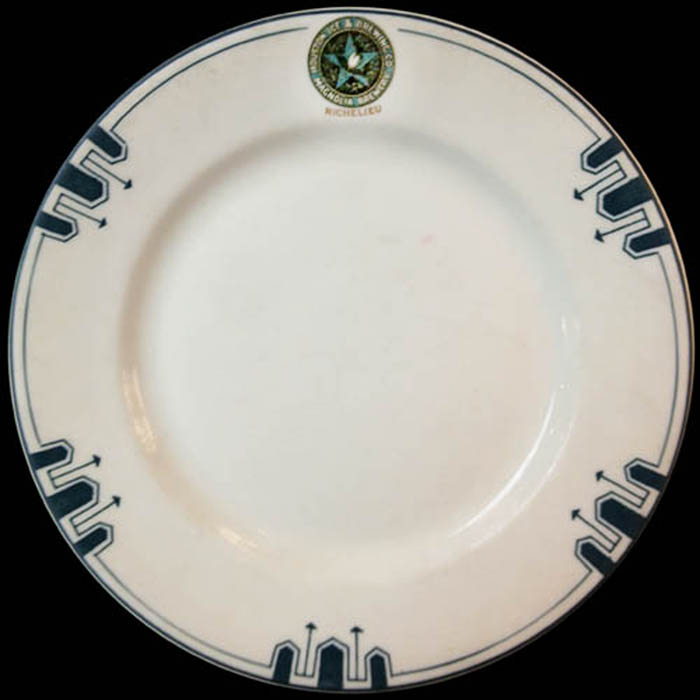 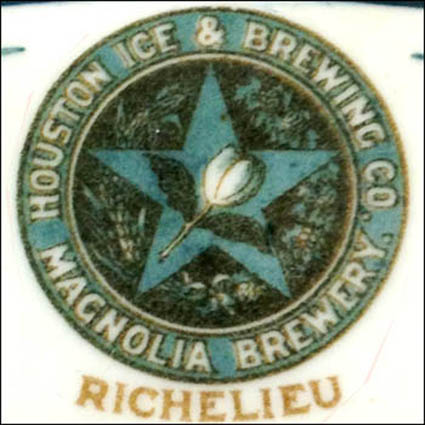 Notes: A brief history of the Houston Ice & Brewing Company brewery, its architect and brew master are located at: http://www.magnoliaballroom.com/brewery_history.html. A more detailed history was written by Louis F. Aulbach: http://bit.ly/17mQMz8.

From the Magnolia Ballroom website: "The Houston Ice & Brewing Company, founded by Hugh Hamilton in 1892, was one of Houston's largest companies at the turn of the century, and by 1910, encompassed more than twenty acres north and south of Buffalo Bayou" in Houston, Texas.

It was built in 1893 and came to be known as the Magnolia Brewery. Among its brands of beers were: Magnolia, Richelieu, Southern Select, Hiawatha and Grand Prize.

It is not known where this Richelieu advertising plate was used, but it ostensibly was ordered to celebrate the creation of the Richelieu beer, first advertised in 1909 according to Louis Aulbach, who wrote that Richelieu "was brewed using the same methods used by breweries in the town of Pilsen (now in the Czech Republic," and that "Richelieu beer was sold in kegs only."

Bart Truxillo, the owner of the brewery building since 1970, surmised that the china "could have been used in the Magnolia Café, which was part of the second floor of the existing building along with the brewery's executive offices around 1911."

After reaching its peak of popularity around 1915, the business slowly declined until it closed in 1950. The Magnolia Brewery Building is listed on the National Register of Historic Places.

The rim pattern is shown in a catalog of Syracuse designs as #320, patent #33,871, isssued Nov. 5, 1907, and designed by E.E. Walter. It is a grouping of black stylized arrows, spaced around the rim and joined by a black line. The same design was used by the Kaiserhof Hotel in Chicago.

The plate's crest is in turquoise or teal blue and green, with a magnolia blossom placed against a star – probably a tip of the hat to the Lone Star State. It is placed inside a circle, which is inside another circle with the text: Houston Ice & Brewing Co. [and] Magnolia Brewery. Outside and below the circle is the name Richelieu, in gold brown.