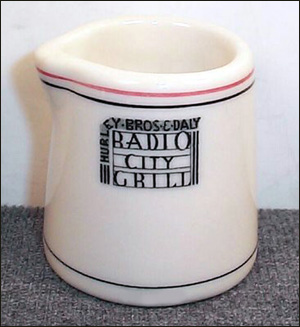 Notes: In 2005, the current owner/manager, Paul Burday, gave the following information about the establishment: The business began in 1892 as Hurley Bros. and Daly at 49th Street and 6th Avenue in New York City. It was a saloon but also served food and the grill part of the business was downstairs. During prohibition, the façade was changed to a flower shop, but the liquor never stopped flowing. The name Radio City Grill was painted on the window of the saloon, but that was the only signage of that name. It was a saloon until 1975.