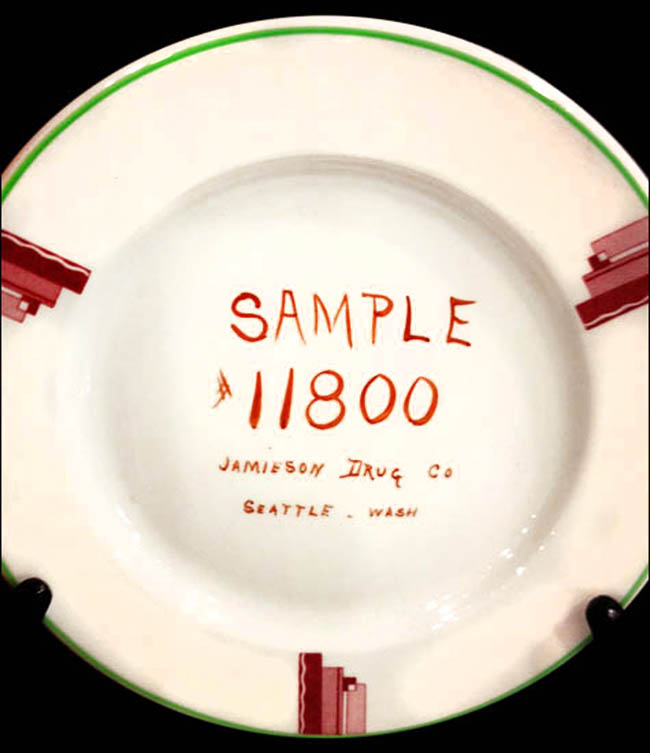 Notes: Jamieson Drug Co. operated stores in a number of locations around Seattle, Wash. In the 1920s, for example, the company operated a store in the Columbia Hotel at 4900 Ranier Ave., and in 1928, it had a store at 4759 University Way.

When the company was founded is unknown, but Jamieson Drug was listed in the 1912 ERA Druggists Directory and it was still in operation in the 1950s. Along the way the name was combined with others, becoming Jamieson-Doane and Jamieson-Daly.

Melforte was Syracuse's series #48300, when used with one line, and was available in 22 different colors. Based on other dated designs in a Syracuse salesman's pattern sample book, it was probably introduced in 1931 or 1932.

The Melforte transfer rim ornaments in an Art Deco design of Santa Rose crimson – red – rectangles and squiggle were spaced around the rim with a mint green rim line.

It is not known if this color combination was stock or exclusive to Jamieson Drug. This is a production sample plate #11800, from the collection of Fishs Eddy in New York City.