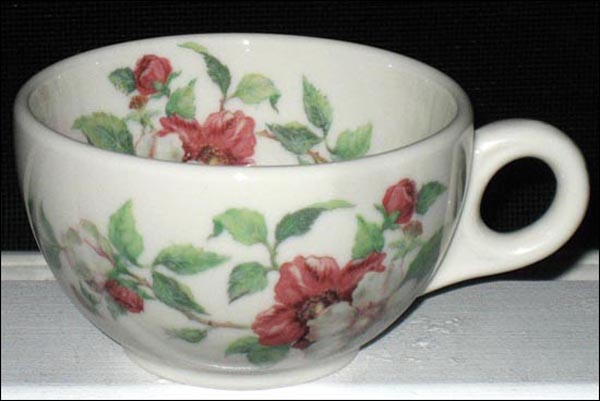 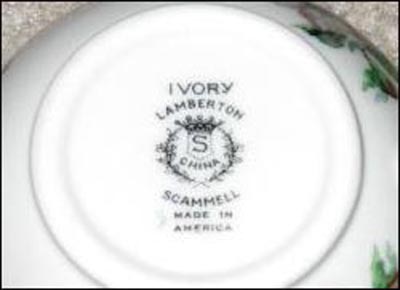 Notes: According to a family member, Jesse's Ranch House was a restaurant in Abington, Penn., located at 1301 Old York Rd. It was owned by Jesse A. and Anna Shahboz.

Invoices of china purchased from Scammell China in 1922 and 1953 would indicate that the restaurant was at least in business by the early 1920s. It closed in the 1960s, was sold and became the Inn Flight restaurant from the early 1970s to May 2009, when that iteration was sold. It next became Timber Grill, which is now closed.

The 1922 bill of sale includes the term Alpine Rose. Considering how seldom Scammell named its patterns, this could refer to the flowers in the pattern – which do resemble Alpine Roses – rather than the pattern name. The pink and white flowers with green leaves were placed on Scammell's Ivory body.

(While there were at least two orders of china placed for this pattern, the backstamp on this cup, which has Made in America in addition to the Lamberton/Scammell crest, is known to have been used in 1931 for a Waldorf-Astoria pattern, so it is likely that this order was filled using china that was made earlier than its 1953 order date.)

ID and photos contributed by oldglory