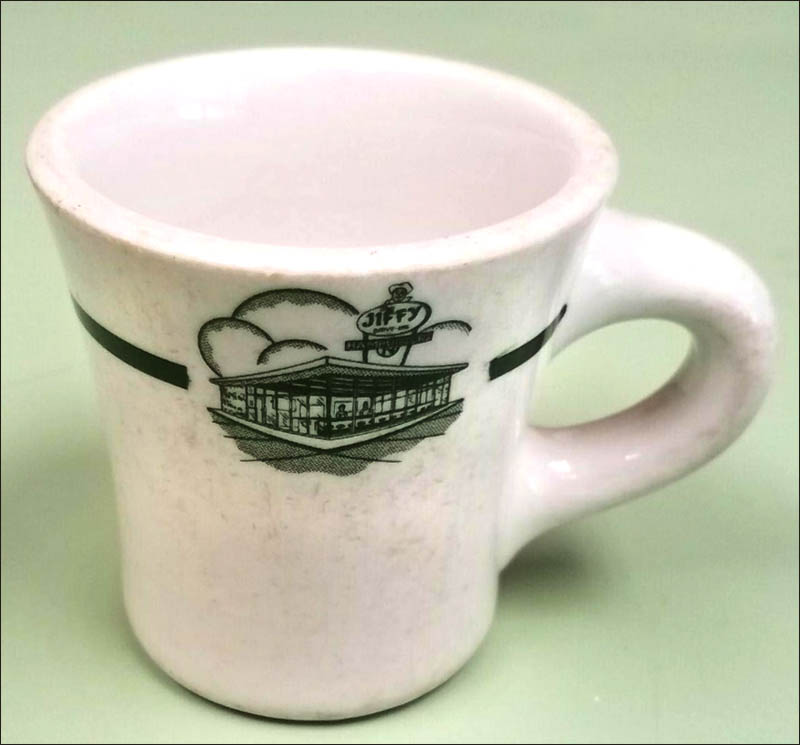 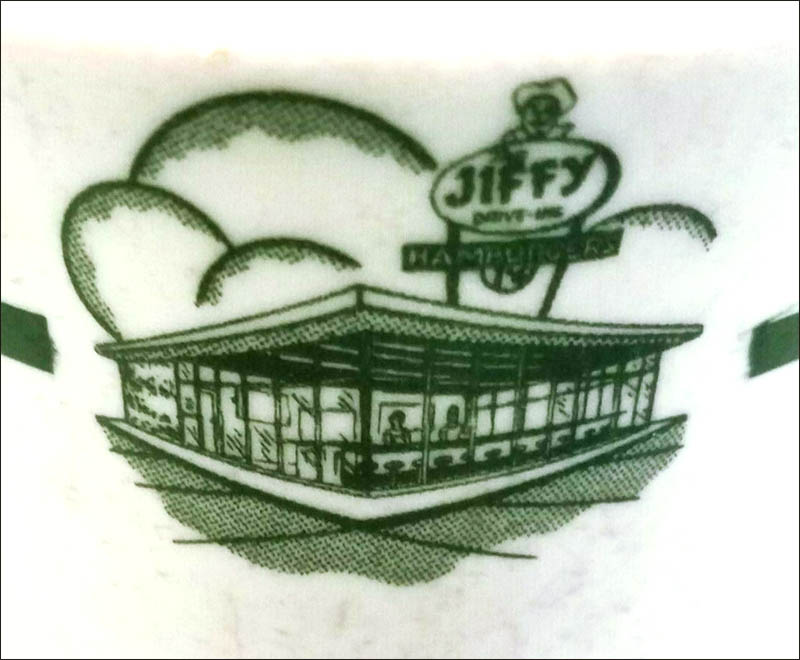 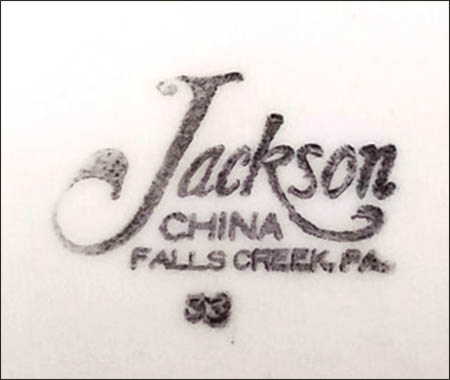 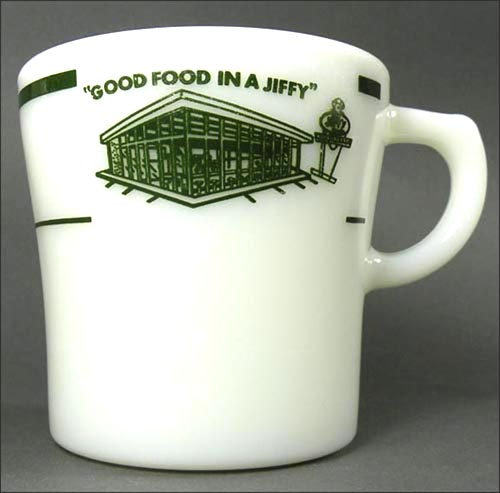 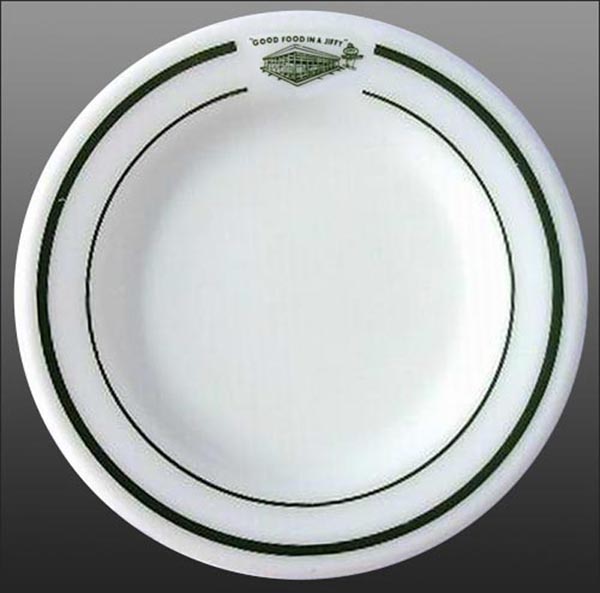 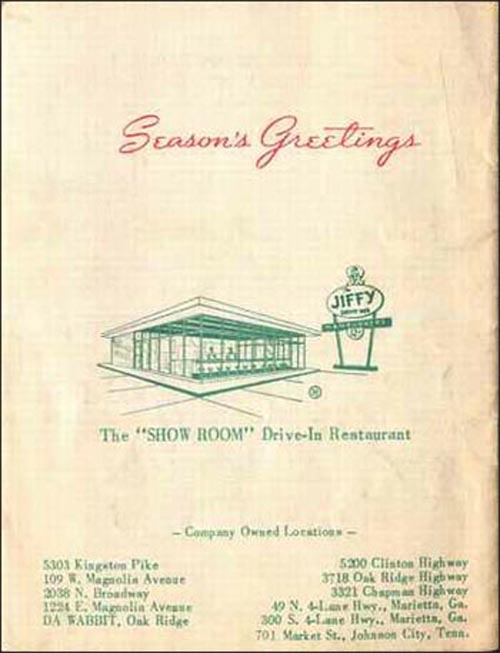 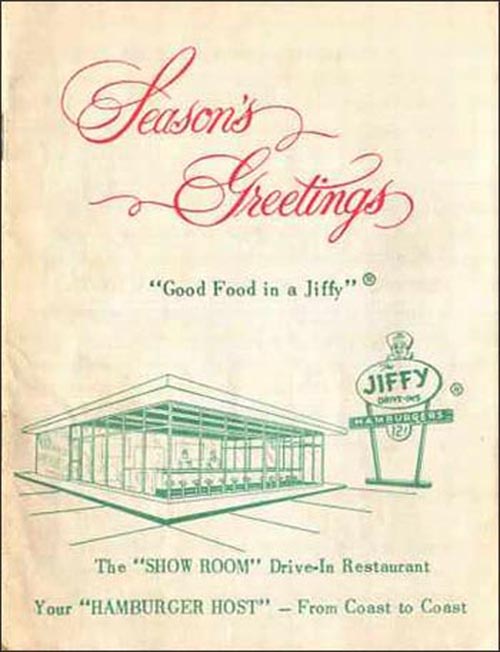 Notes: Founded by Clarence Weaver in 1954, the first Jiffy Drive-In was located on Central Avenue in Knoxville, Tenn. Although initially a soft-serve ice cream stand, Weaver's roots were in hamburgers, having worked at Chattanooga's Krystal chain in the 1940s. The name Jiffy came from Weaver's sister-in-law, to convey good food served quickly. Square hamburgers served with pickles and onions steamed on a grill with the bun on top (sound familiar?) were the mainstay and cost just 12 cents. The streamlined menu also included breakfasts, milk shakes, pies and French fries.

In 1962, franchises were available for $22,500 and included plans for the building as well as two weeks' training. North Carolina, Georgia, Texas, Florida, Illinois, Missouri, Alabama and other states joined the 57 company-owned and franchised locations, although not all were built in these states as franchises were sometimes sold but not built. The standardized building could be up and running in 90 days.

"Good Food in a Jiffy" was the slogan for the chain as well as "Your Hamburger Host from Coast to Coast."

One way Weaver advertised his Jiffy Drive-Ins was his 1930 Ford Model A, which was painted in the company's colors of green and yellow with the Jiffy logo. Painted on the spare tire was "I may be old-fashioned but we serve good food in a jiffy."

Weaver sold his interests in the chain in 1969, and by 1971 the chain was in bankruptcy. Weaver went on to start up Dilly Shops in Cookeville, Tenn., but it did not last long. Also affiliated with Jiffy Drive-Ins was Da Rabbit, located in Oak Ridge, Tenn., which did not allow chain restaurants at that time. A Jiffy Drive-in opened once again in Knoxville in 1984, but it lasted just more than a year. Weaver died in 2004.

The vitrified mug made by Jackson China is a slightly different version of the same topmark.