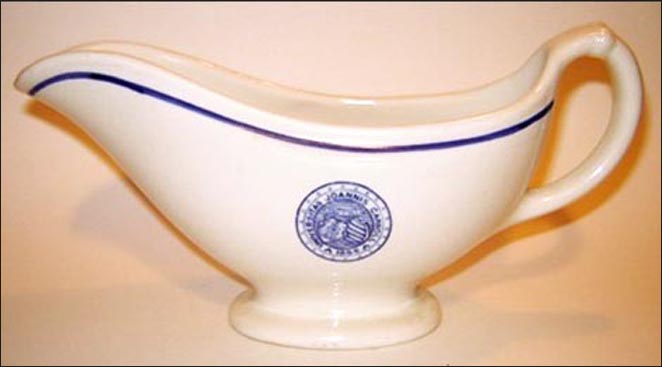 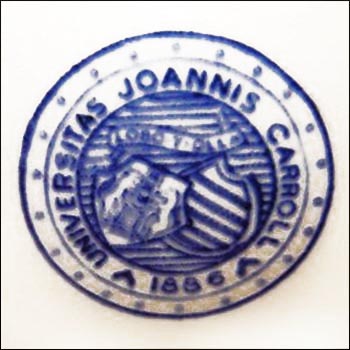 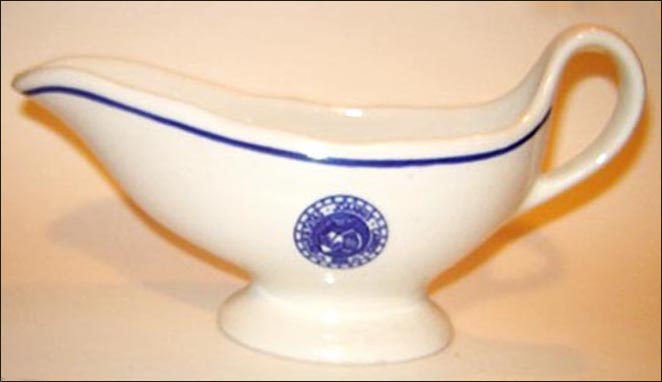 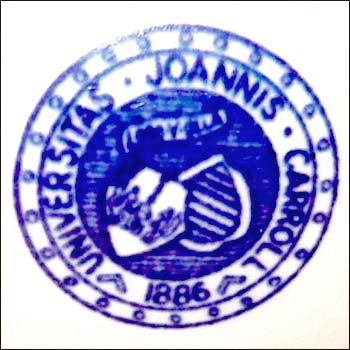 Notes: John Carroll University – a Catholic and Jesuit college in University Heights, Ohio – originally was founded in 1886 as St. Ignatius University in Cleveland. In 1923, it was renamed for the first American Catholic Bishop, John Carroll of Maryland, hence the connection between the date and name in the university emblem or seal.

JCU moved to the east side of Cleveland, to University Heights in 1935 and became a co-educational institution in 1968. The university has maintained a high rating among Midwest colleges and universities. Alumni include such notables as pro-football player and coach Don Shula, singer Eric Carmen and NBC bureau chief Tim Russert. Click here for more JCU information.

White gravy server with a thin blue stripe border along the upper edge and handle. Topmarked on both sides with the blue JCU seal that reads: Universitas Joannis Carroll 1886.

According to the John Carroll University Graphic Standards and Editorial Stylebook: "The seal is composed of two shields, one with two wolves and a kettle, and the other with seven originally red bars on a field of gold. It is thought that the words, "lobo y olla," are the Spanish for wolf and kettle or pot. However, since Ignatius Loyola came from the Basque country, there is some question as to the translation. In the Basque language, the translation of those words would indicate an abundance of land. Another translation of the same phrase also indicates wealth to the extent of being able to feed the people and the wolves. According to Fr. James Broderick, S.J., in Saint Ignatius Loyola, the "two wolves rampant on either side of a hanging cauldron was the adopted escutcheon (heraldry of the shield) of the Loyolas." Very possibly, also, the presence of the wolves could be referenced to the constant battle these animals faced by the farmers of Guipuzcoa (Ignatius' homeland). The boiling cauldron symbolized hospitality, a virtue the Basques were known for. The seven originally red bars represented the seven brothers of the Onaz family, the paternal family of Saint Ignatius."