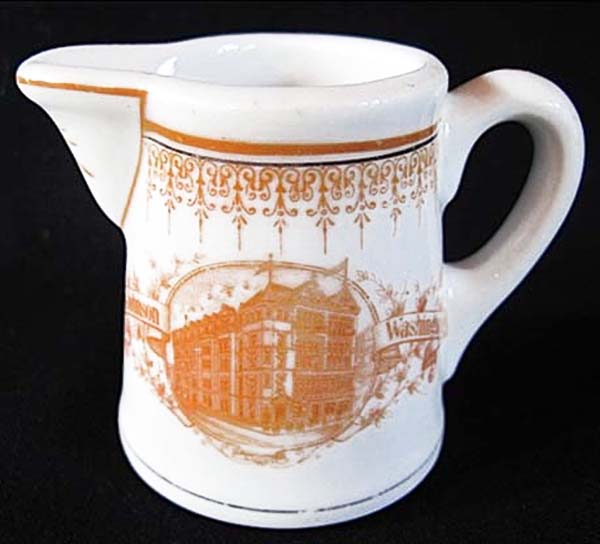 Notes: A saloon and gambling house owned by Charlie Godfrey was purchased by Esau L. Johnson in the 1870s. Johnson remodeled the building to be a hotel, located on the southeast corner of 13th and E streets, N.W., in Washington, DC.

What began as perhaps nothing more than a boarding house was expanded in 1894 (it is listed in the 1894 Hotel Red Book) by leasing an adjacent hotel, the Adalinda, and again in 1901 by the purchase of other adjoining properties.

According to the article Lost Washington: The 'Notorious' Sterling Hotel at greatergreaterwashington.org, "Until the 1890s, many people considered it bad luck to completely tear down an old building and replace it. Much better to connect existing building, add floors, redo the facade, etc. Thus almost all of the old Washington hotels – including Brown's, the National, Ebbitt House and the old Willard – were built up by combining and expanding existing structures."

In 1912, Johnson sold his five-story hotel to Charles Jacobsen. Again the hotel was remodeled, and Jacobson renamed the hotel The Sterling. It opened Dec. 14, 1912. The Sterling was razed in 1932 and was a parking lot for more than 20 years.

The small handled creamer has a white body, black and orange lines at the top and a black line at the bottom, and a pale orange decoration and image of the hotel. On either side of the hotel are the words Johnson, at left, and Washington, at right.