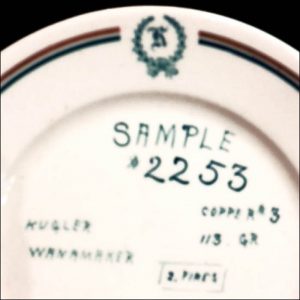 Notes: Clarence B. Kugler opened his restaurant on Broad Street in Philadelphia around 1881. (A 1941 menu states "over 60 years"). The original dining room was a large two-story rectangular space with a wrap-around mezzanine level below the stained glass sky-lighted ceiling.

When the Widner Building on Chestnut Street opened in 1914, Kugler moved into the basement – 1412-1429 Chestnut – with its own private elevator. This restaurant contained a number of different dining rooms and could seat up to 1,000 guests. Kugler also operated a cafeteria on the second floor at 30-36 S. 15th Street.

Syracuse was not the only maker of china for Kugler. Scammell produced a different style crest, an oval with simpler upper case, serif K with acanthus spray on top and the name below. This china, also supplied by Wanamaker, was made on Lamberton and Trenton china.

A 1936 magazine advertisement for Camel cigarettes featured a color photograph Kugler's with service plates that had a full red rim and multicolor decoration in the center of the well. An undated postcard view of the dining room shows china with a mid-rim border band. So there were a number of different patterns produced for Kugler's.

This is Syracuse's production sample plate #2253 from the collection of Fishs Eddy, crested with an upper case Old English-style K within a wreath with bow. Flanking mid-rim lines in copper #3 and 113 GR (rust and dark green).