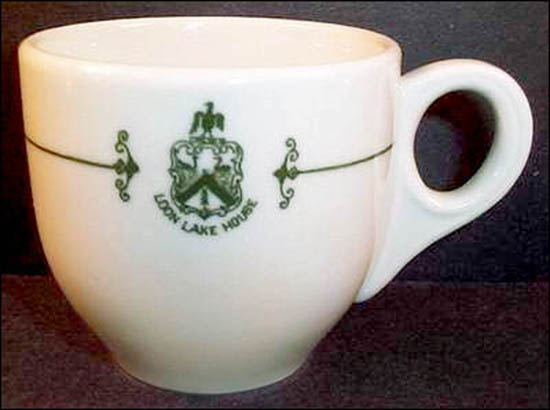 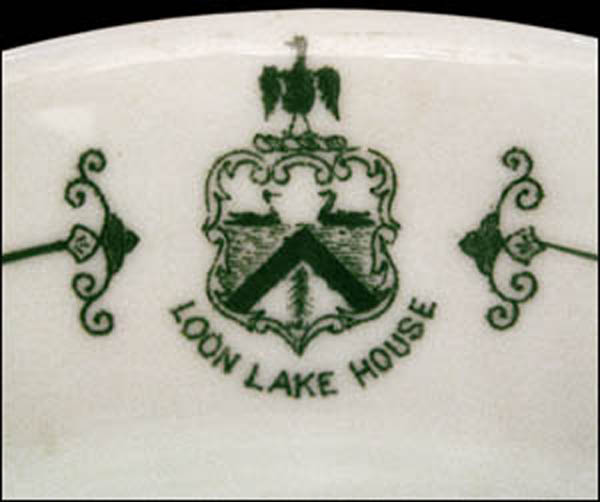 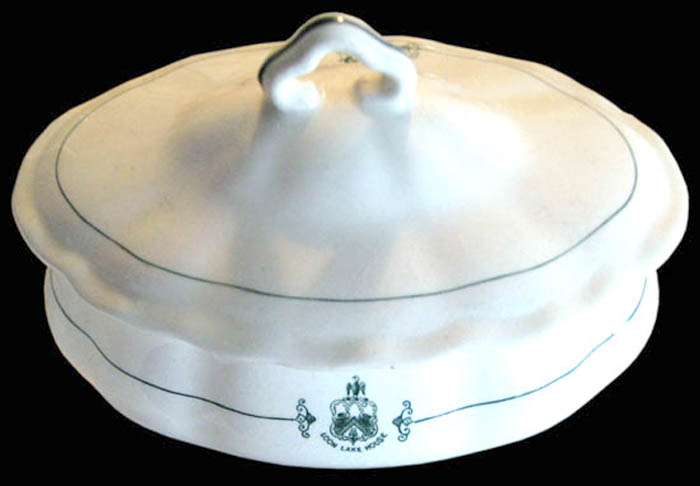 Notes: Located on Loon Lake, N.Y., the Loon Lake House was considered one of the most popular and successful hotels of the Adirondack Mountain resort areas of New York. Originally built by Ferd and Mary Chase, the hotel was a summer resort that had its own golf course, power plant, blacksmith, water system, laundry and bowling area. The hotel was a beautiful Victorian four-storied structure that had 31 rooms, was located directly on Loon Lake and was operated by the Loon Lake Hotel Company (Chase Family). The hotel's operation fell onto hard times at the onset of the Depression in 1930 and never regained its grandeur. The hotel caught fire on Sept. 20, 1956, and burned completely to the ground.

White body with dark green emblem of two loons sitting on a lake and a single evergreen tree in the foreground. A spread-winged loon is perched on top of the emblem and the words "Loon Lake House" appear beneath the emblem. On either side of the emblem, there is an Art Nouveau arrowhead design, marking the ends of a dark green, pin stripe border.

When the cup, shown above, was added, it was not backstamped and a manufacturer was not known. Now (2014), thanks to photos and information contributed by Judy Soslau, we know that at least three manufacturers provided china to the Loon Lake House: Syracuse, Iroquois and an English company that used James M. Shaw & Co. as a distributor.

In addition to the cup, pictured above is a 6.5-inch oval casserole (with crazing) with the James M. Shaw & Co. mark as well as a detail photo from either a Iroquois China plate (date code range: 1917-1921) or a Syracuse China plate (date code range: 1922-1937). Based on the known dates, it would make sense that the ware with crazing was updated with an order to Iroquois and then an order to Syracuse. Both of the latter, of course, were New York State manufacturers.