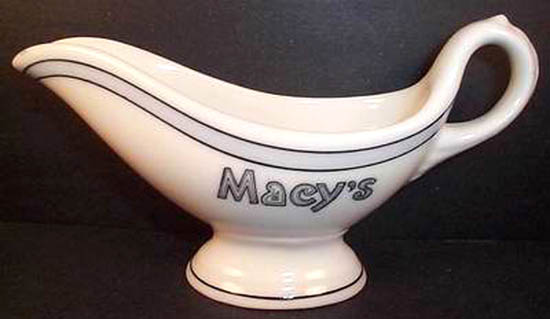 Macy's was founded in 1858 by Rowland Hussey Macy, who originally operated a dry good store in Nantucket, Massachusetts in 1851. A few years later, Macy moved his operations to New York City and opened his new store at 14th and 6th Avenue under the name of "R. H. Macy & Company". Later, he moved the store to 18th Street and Broadway to the "Ladies' Mile" district — the most prestigious shopping district in the City at the time. In 1896, Macy's operations was acquired by Isidor and Nathan Straus (the famous Nathan Straus Stores in New York), which by 1902, they had moved Macy's to Herald Square at 34th Street and Broadway. Macy's went onto to take over other Department Stores, including Lazarus, Marhshall Fields, LaSalle's and other famous stores as part of its Federated Department Stores. Today (2008), Macy's is one of the biggest fashionable Department Stores, with operations in all parts of the United States.

This sauce gravy boat features the famous "Macy's" logo in gray and black outlined lettering on the side, along with a gray and black pin stripe border at the top on a Lamberton China body.