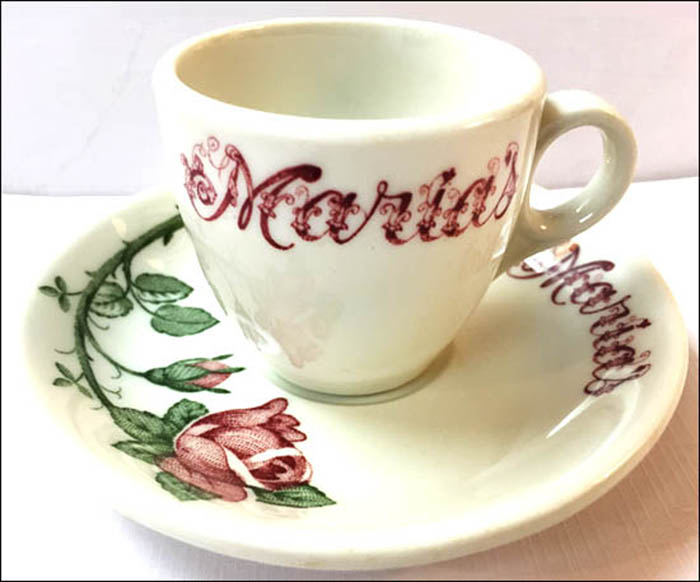 Notes: Maria Allori and her husband, Mario, opened Maria's "300" in 1934. The "300" came from its address at 300 Albemarle St., in the Little Italy section of Baltimore. The restaurant was located in a small two-story brick building, with about 6,000 square feet on the main floor and less than 4,000 on the second.

In the 1950s, the building was modernized with a coating of Baltimore's famous Formstone™, a gray concrete stucco coating that was scored to somewhat resemble stone blocks. Glass block window walls were added on each side of the corner entrance. A large neon sign over the entrance proclaimed 'The Original Maria's "300".'

Maria's great Italian cooking attracted not only scores of Marylanders, but also the famous: Dean Martin, Rocky Marciano, and Gene Autry, to do just a bit of name dropping. H. L. Mencken, one of Baltimore's famous writers, made Maria's his annual Thanksgiving dinner location of choice. In return, Maria created Crab Sorrento in his honor.

Maria Allori died in 1974, and by 1977 the restaurant was closed until back taxes were paid. Later it reopened as Russo's. By 2013, the Formstone™ had been stripped off, the glass block replaced, and the building was up for sale.

The china features a large red rose with green stem and leaves, which symbolizes Maria's favorite flower. Opposite it on the rim is Maria's "300" in ornate red script lettering. The "300" is not used on smaller size pieces in this service.