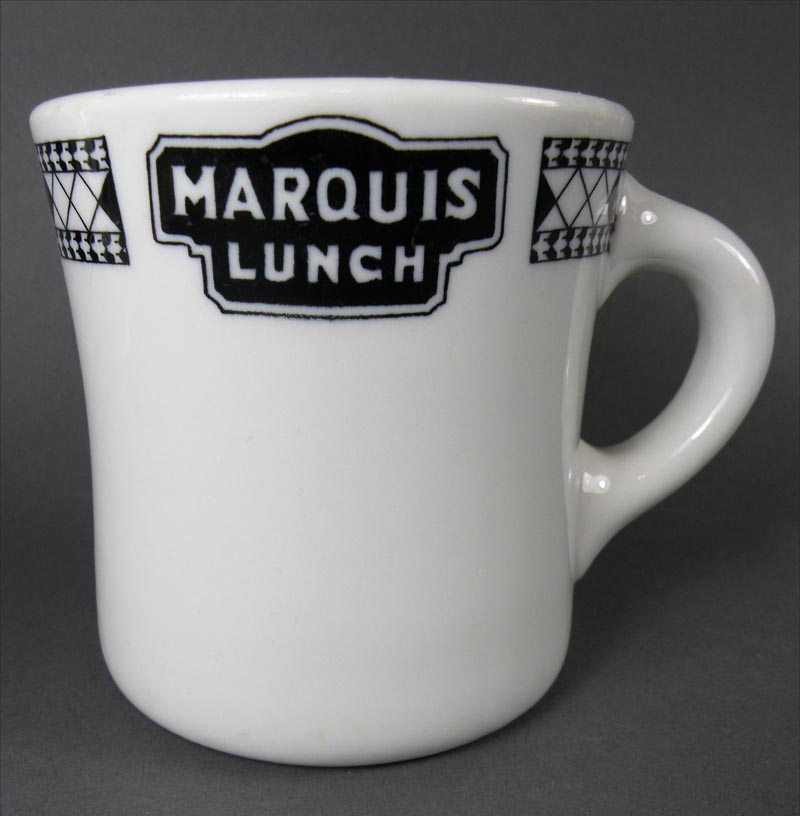 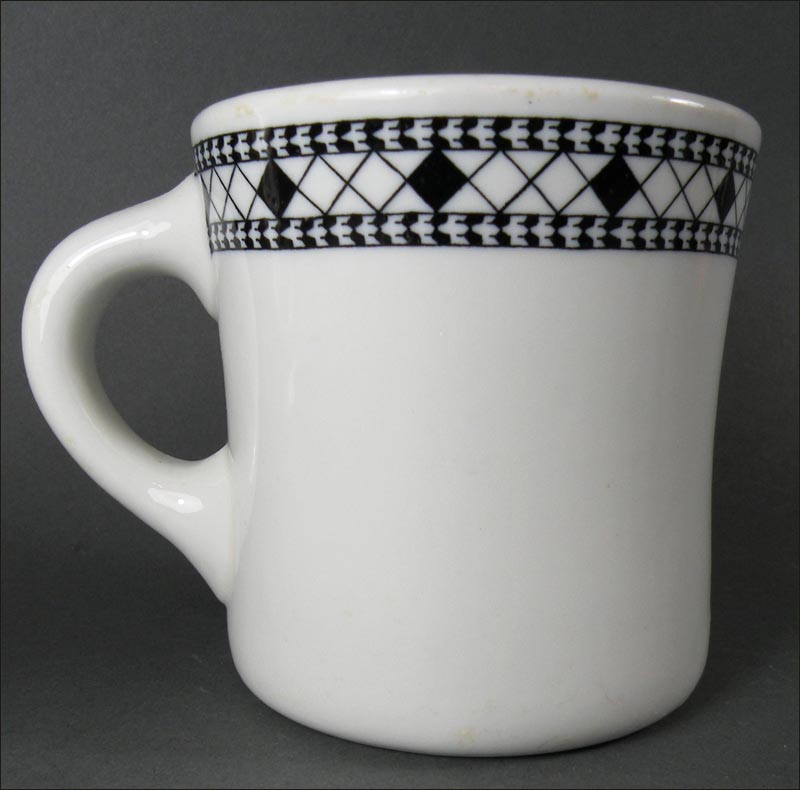 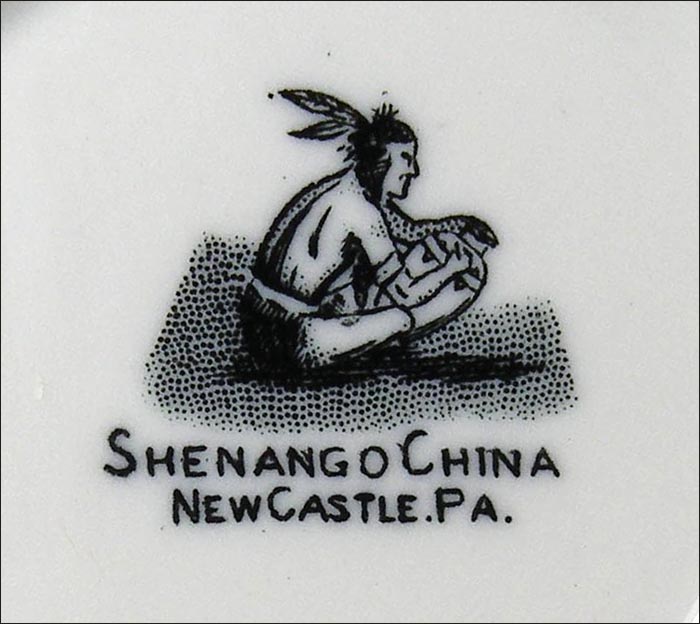 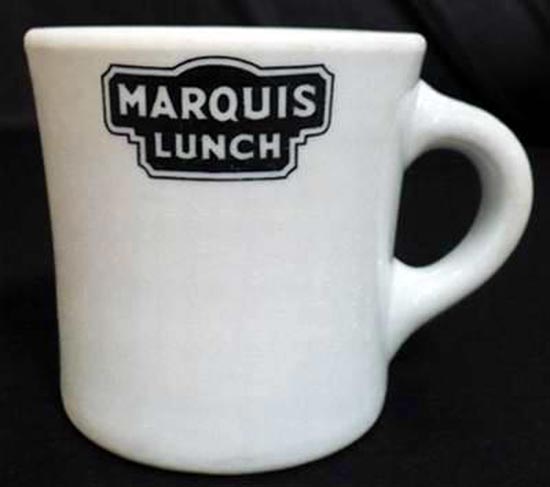 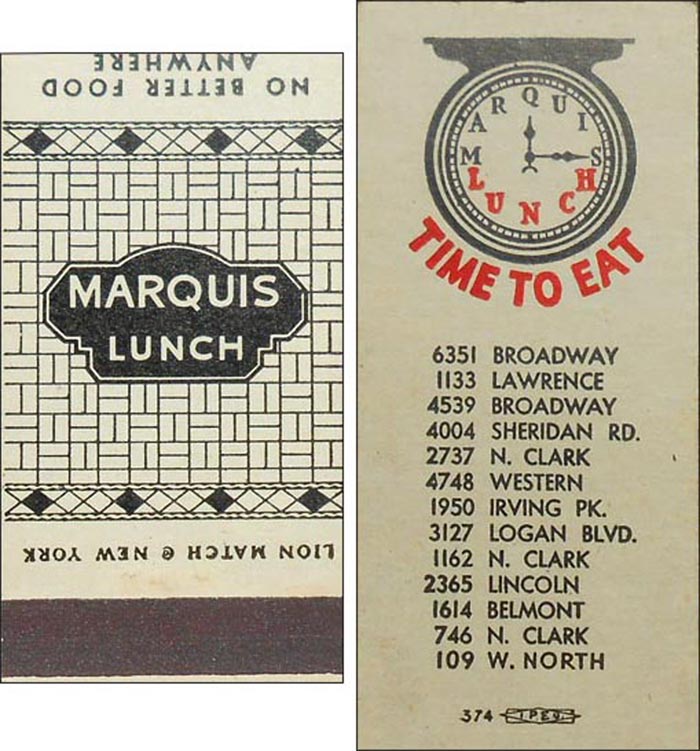 Notes: According to Judy Malooly Joyce, daughter of the general manager of the Marquis Company, Marquis Lunch (pronounced Mar-kwis) was in business in Chicago from 1915 to 1962. The matchbook, shown above, indicates there were at least 13 locations.

Don't miss the essay below written by Judy that gives a fascinating glimpse of the restaurant and its business practices.

The china has a white body with black and white Marquis Lunch topmark. One variation has an Art Deco border design, the other has no border as shown above.

Marquis Lunch restaurants were located in many north side Chicago neighborhoods, at busy corners where the bus, streetcar lines, and "L"(that is the elevated and subway trains) met and where shoppers found department stores, bakeries, delicatessens, small retailers, shoe stores, movie theaters and more in each neighborhood, long before shopping malls existed. The last name of the owners and restaurant name was pronounced as written or phonetically as "Mark-wis", not as a French name.

Marquis Lunch cafeteria stores were popular from 1915 through1962 for good homemade food, cleanliness and courteous service, in addition to being open seven days a week, 24 hours a day. Each location looked exactly the same: white subway tile on the walls, small white floor tiles accented with black tiles, bentwood chairs at white marble topped tables and additional tall marble top tables with high swivel stools, both bolted to the floor. Each location was housed in a (usually double) storefront having clear windows so the entire restaurant could be seen from the sidewalk and street. The only exception to the window being clear was a large black and white clock reading "Time for Lunch" in place of its numbers at the window's center.

My father, Bill Malooly, worked at the Marquis restaurants from about 1929, when he was in high school at DePaul, until 1953 (when I was 12 years old), after having been the general manager of all the Marquis Lunch locations for as long as I could remember. A friend of his in high school was Howard Marquis (the son of one of the founding Marquis brothers), and they both began working at Marquis Lunch moving into different positions as they became available. Young Howard did not stay with the restaurants full time as my father did; ultimately my father became the general manager for all of the twelve Marquis Lunch restaurants. Howard did continue to do some work as it was his family's business – in fact he was the editor for the company's 1940 "Hospitality for Hire"booklets.

In celebration of the company's 25th anniversary, an internal booklet "Hospitality for Hire" was written and printed each month in that anniversary year of 1940. The booklets contained a history of the company, jokes, articles for and by employees and information on the best way to do a job, make the best coffee, how the dairy and meat arrived at each location, the averages of the company bowling teams, softball winners, etc. and the Marquis Company's platform (today it would be known as a mission statement). (Read the text of the first mission statement, after the photo, above.)

Our family of four often ate at one of the Marquis Lunch locations due to their great locations in shopping areas serviced by public transportation. My mother, brother and I would take the bus to shop, go to the doctor, etc., then would meet my dad at the restaurant close to where we were. He would make sure that particular location was his last restaurant stop of the day and we could drive home with him after dinner. I recall that my brother and I always ate the same entrée, a hot beef sandwich with lots of really good gravy, which was one of the staples not changing daily. All the countermen, cleaning porters, courtesy women refilling coffee, chef in the back, etc. made us feel special and important.

As a matter of fact, my parents originally met at the Marquis Lunch at 2365 Lincoln Ave., which was at the major corner of Lincoln, Fullerton and Halsted streets in the Lincoln Park area of Chicago. My mother was a receptionist at a nearby doctor's office and often went to lunch at that Marquis Lunch location and the rest, as they say, is history.

My father, on occasion, went into the office on a Saturday afternoon, when it was less hectic to get paper work done (at 2652 W. Montrose). Sometimes I would go with him and played secretary outside his office. At the same location was the company laundry, bakery, maintenance department, garage for their company trucks, a large accounting office in addition to a grassy area with a fish pond and a seating area inside the "L" shape of the buildings. One of the best parts of an office visit for us as children was going into the big bakery where the bakers made sure we got our favorite sweet rolls to eat in addition to insisting we each take a bag full home. I have not had any as good as that again!

From 1954 until his retirement my father managed several upscale restaurant locations and large corporation cafeterias and executive dining rooms, with his last work location being Evanston Hospital. One day while at the hospital, the name Lu Marquis appeared on a patient list! He had been out of touch with the Marquis family for many years and was delighted to see Lu Marquis, Clif's wife, as she had always been a real favorite of my dad and our family. He, of course, was unhappy to find that she was ill on and off from that time forward, but they did renew their friendship. Her husband, Clif, and his brother, Don had passed away years before.

As Lu became more ill, she asked my father for his assistance in handling her bills and paperwork, which he did until her death. My parents went to Lu's condo about once a month, socializing with her while my dad took care of her paperwork. Keep in mind that she had no children or other family and she had known my father since he was in high school and trusted him completely. In fact, once she knew her life would be ending, she asked him to promise to continue to take care of her blind sister's bills etc. until her death. My parents did that until my father was ill and unable to continue very often. In fact my father died before Lu's sister; my mother helped the sister when she was able prior to the sister's passing.

Additional notes by Judy Malooly Joyce:
"As I recall Marquis Lunch and read these anniversary booklets from 1940, I believe that the Marquis Lunch Company was ahead of its time doing business, setting priorities, and working with the employees, especially for the restaurant business.

"Their priorities of cleanliness, pride of work no matter what the job, offering partially paid health insurance, sponsoring staff sports teams, providing an annual dance with live music in a hotel ballroom, starting bank accounts for all newborn babies of the staff was new to the industry and set the tone for both company and staff.

"As the company grew, by 1930 there were detailed procedures for each position and work processes with specific training, white crisp uniforms with name tags provided, a change of porters to the same uniform as all staff in the restaurants. (In those days the uniform norm for cleaning porters in restaurants and most public locations was a blue ticking striped uniform, therefore separating the porters from other positions.) Normally restaurants tend to have workers who are considered 'untrained' personnel and many of these workers use these jobs as something to 'tide them over' and, for whatever reason, they come and go with regularity. Marquis Lunch worked hard at hiring the right people, including for entry-level positions, who had work ethics, a courteous nature and were willing to learn, with every opportunity and training provided by the Marquis Company.

"The standards were kept up seven days a week, 24 hours a day, 365 days a year, and the same quality, business practices and look of each restaurant location was exactly the same. The result was that by 1940 more than 33 percent of the staff at all levels had more than 10 years of service. There was more than one employee who started as a night-porter moved to day-porter then to night counterman on to assistant manager and ultimately to a restaurant manager." 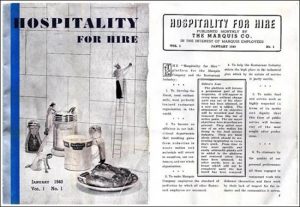 Above is the front cover of the first "Hospitality for Hire" booklet that included the history of Marquis Lunch detailing the timeline of location openings, changes and the company's processes, growth and highlights of employees who worked for many years at Marquis Lunch.

Published Monthly by The Marquis Co. In the Interest of Marquis Employees
Vol. 1 | January 1940 | No. 1

"The 'Hospitality for Hire' platform for the Marquis Company and the Restaurant Industry:

1. To Develop the finest, most enthusiastic, most perfectly trained restaurant organization in the world.

2. To become so efficient in our individual departments that resulting gains from reduction in waste motion and materials will revert to ourselves, our customers, and our whole organization.

3. To make Marquis Company employees the standard of perfection by which all other Restaurant employees are measured.

4. To help the Restaurant Industry attain the high place in the industrial plan which by its nature of service is justly merits.

5. To make food and service work so highly respected in terms of its merits and dignity that this form of public service will become one of the most sought after professions.

6. To eliminate by the quality of our personal performance all those engaged in restaurant work who dishonor themselves and their work by their lack of respect for the industry and the communities it serves.

Editor's Note: The platform will become a permanent part of this magazine. It will appear in every issue without change until any of the objectives has been attained, or a new one is added. The attainment of an objective will be recorded and then removed from this list of active goals. The six major objectives here described are general. They affect each one of us who makes his living in the food service industry. They are basic ideals which should be motivating inspiration in every day's work. From time to time more specific and easily attainable planks will be added to the platform and removed when they have been attained. In other words, here is one house which will not be completed until the last board has been removed."