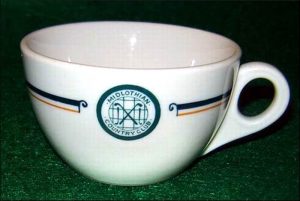 Notes: The Midlothian Country Club of Midlothian, Ill., began as a club well outside of the city along the Rock Island line. Stopping at Rexford Crossing and traveling a short distance west, the club was founded in 1898 and has hosted many prestigious games. These include the 1914 U.S. Open and the Women's Western Open in 1931. One founding member was John Shedd (Shedd Aquarium). Click here for more history about this club that continues its championship tradition in 2009.

White body with dark green and orange bands, and a slightly lighter green logo. The logo consists of a tartan-style background upon which four clubs rest, forming an 'M'.